Queen Mary University of London was the first accredited university in the UK to pay a real living wage. 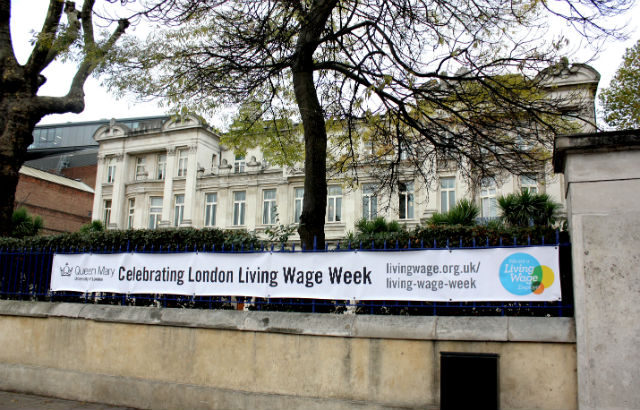 The Mayor of London, Sadiq Khan today announced the new Living Wage rates including the London Living Wage at £10.55 per hour and £9 for the rest of the UK. The real Living Wage is an hourly rate independently-calculated on the basis what it costs to live and support a family.

Speaking at the Living Wage Week launch in London Sadiq Khan said: “Nearly a fifth of all jobs in London pay less than the Living Wage. Nobody who goes out to work every day should have to live in poverty. We can, and must, do better.”

In addition to adopting the Living Wage, Queen Mary also introduced new working conditions for staff. By January 2008, every staff member at the university – regardless of rank or role – received a basic minimum package of 30 days’ annual leave, access to sick pay, an annually negotiated pay increase and an employer-contribution pension scheme.

Khalid Rouas, who works in Queen Mary’s Estates and Facilities Directorate shared his own lived experience of the Living Wage at the launch: “Prior to the Living Wage being introduced, I found it very hard to make ends meet. It was hard to find the money to pay the rent. I would have to work a lot of overtime which meant that I didn’t see much of my family.

“Earning the London Living Wage helped me considerably and had a big effect on my family and so many other families where the Living Wage is being paid.”

Professor Peter McOwan, the Vice-Principal for Public Engagement and Student Enterprise at Queen Mary said: “Listening to Khalid’s story shows the life-changing impact the Living Wage can have on people, their families and their communities. We hope that by paying our staff the London Living Wage we are setting an example that will help the campaign as it grows into a national movement.”

The living wage aims to have an impact on high rates of ‘in-work poverty’ that affects millions of households in the UK by introducing a higher minimum pay threshold based on the amount an individual needs to earn to cover the basic costs of living.

As a principal partner of the Living Wage Foundation, research from Queen Mary’s School of Geography has provided evidence to support the campaign for employers to adopt the Living Wage.

Find out more about Queen Mary’s research on the Living Wage here.