A researcher from Queen Mary University of London (QMUL) has been announced as one of the winners of the Wellcome Image Awards 2017. 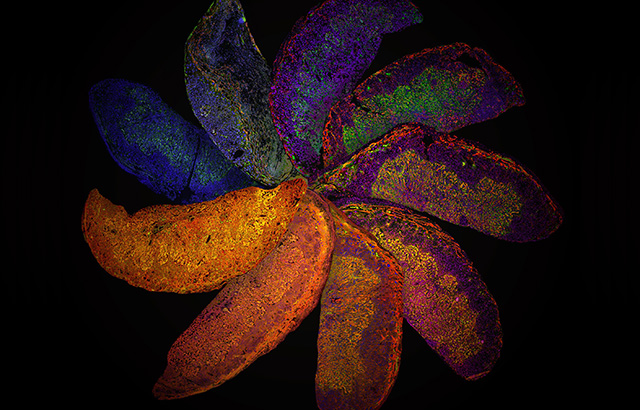 Dr Suchita Nadkarni’s photo, titled The Placenta Rainbow, is based on her research into pregnancy complications, and will be shown at exhibitions held across the UK and internationally, including Russia and South Africa.

The Placenta Rainbow highlights differences in mouse placental development that can result from manipulation of the mother’s immune system.

The placentas are from mice with genetically different immune systems, and have been stained for three proteins. Blue represents the nucleus, where DNA is stored and controlled; blood vessels are stained in red; and trophoblasts, the first cells to form in the developing embryo, are stained in green.

Additional colours are present due to an expression of two or more of these proteins in the same cell. The range of colours indicates the significant effects that differences in a mother’s immune system can have on placental development. These techniques help researchers understand and identify ways to treat complications that arise during human pregnancies.

Dr Suchita Nadkani from QMUL’s William Harvey Research Institute, and British Heart Foundation research fellow, said: “The Wellcome Image Awards is such a world-renowned competition, so it's pretty amazing to be selected as one of the winners, especially given the very high calibre of images entered. The awards are such a great way of highlighting the research scientists do and conveying them in a way that the public can engage with.”

The Wellcome Image Awards are celebrating their 20th year of showcasing the best in science image making. The awards will be presented at a ceremony on 15 March 2017 where the overall winner will also be revealed.

The 22 winning images will then be exhibited in venues across the UK, Europe and Africa, displayed in the windows of Wellcome’s HQ in London, and made available on the Wellcome Image Awards website.

Catherine Draycott, Head of Wellcome Images and chair of the judging panel said: “It’s now 20 years since the first Wellcome Image Awards and we continue to be surprised and delighted by the range of extraordinary images we receive each year. We are thrilled that they will be displayed across the UK and abroad so that people can come and explore the stories behind these stunning images.”