Patients who have aggressive prostate cancer could be identified by a highly accurate and simple blood test, according to an early study by Queen Mary University of London (QMUL). 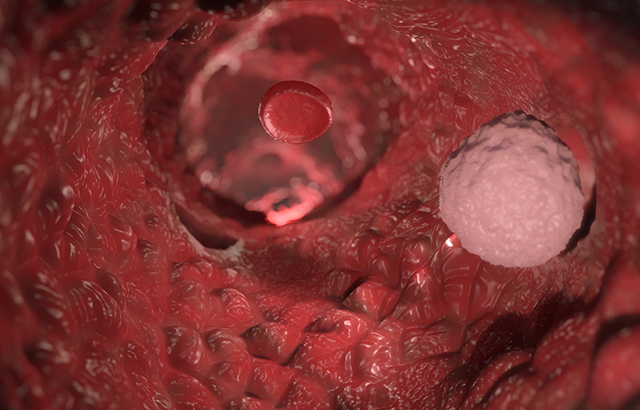 Metastasis - Invasion of cancer in the bloodstream

The research discovered rare cells in the blood that could be used to identify patients who are 10 times more likely to die of their prostate cancer, allowing targeted treatments to be offered as early as possible.

Prostate cancer is the most common cancer in Western men and the fourth most common overall, with more than 1.1 million new cases recorded in 2012. Identifying patients with aggressive cancer could have major implications for their treatment; however, methods to detect whether the cancer has spread (metastasis) are costly and expose patients to radiation. A simple blood test that is accurate and has the ability to predict earlier whether the prostate cancer has become metastatic would meet a key unmet medical need.

The study, published in the journal Clinical Cancer Research, analysed blood samples from 81 prostate cancer patients using a new cell capture technology called Parsortix™ developed by the British company ANGLE plc. Unlike many other systems, the Parsortix system captures all types of circulating tumour cells (CTCs) - cancer cells that have left the original tumour and entered the bloodstream prior to spreading around the body.

Identifying metastasis - the spread of cancer

Metastasis is responsible for over 90 per cent of cancer-related deaths. The researchers investigated various types of CTCs including two that are involved in the metastasis process. The number of ‘EMTed’ CTCs, which had previously not been possible to capture by many other systems, was associated with poor patient survival, while the presence of ‘EMTing’ CTCs was closely correlated with whether the patient’s cancer had become metastatic.

Using the Parsortix system, the researchers also discovered the presence of rare cells in the blood, known as ‘megakaryocytes’ – large bone marrow cells which produce platelets for blood clotting. Megakaryocytes have never before been linked to cancer prognosis, but the presence of these cells was found to be strongly linked to patient survival, with better outcomes for patients with greater numbers of megakaryocytes.

Lead researcher Dr Yong-Jie Lu from QMUL’s Barts Cancer Institute said: “This work opens up a wide range of exciting opportunities to benefit cancer patients. We have already started to test more patient samples and will soon move on to wider clinical trials to confirm the efficacy of the test. We are also working to see if this test can be used on other types of cancer.”

The team found that combining the number of ‘EMTing’ CTCs with the patient’s ‘Prostate-Specific Antigen’ level (used in currently available tests) gave the best predictor of metastasis (over 92 per cent accuracy), significantly out-performing all current tests.

They also developed a combined scoring system, taking into account the numbers of both ‘EMTed’ CTCs and megakaryocytes harvested by the Parsortix system from a patient’s blood. The scoring system was developed with 40 patients who had their disease monitored over a 20 month period, and was able to identify patients who were 10 times more likely to die from their disease in the short term.

Rebecca Porta, CEO of Orchid – Fighting Male Cancer, the main funder of the study, added: “This is a very promising study for patients and has the potential to significantly increase the ability of clinicians to act earlier to treat those who are at a higher risk of dying earlier from their cancer. Delivering more appropriate treatment more quickly could help to save lives and pro-long life expectancy.”

Dr Catherine Pickworth, Cancer Research UK’s science information officer, said: “Cancers spreading to new areas of the body is the main reason why people die from the disease. This study shows a potential new way of helping to monitor this spread in men with prostate cancer. It was able to predict which patients were likely to fare better than others, based on the number of a rare type of immune cell found in the blood. This may help doctors make better-informed treatment decisions based on the extra information, and ultimately improve survival.”

The research was funded by Orchid – Fight Male Cancer, Cancer Research UK and ANGLE plc, developers of the ParsortixTM system. The Chinese Scholarship Council provided funding support for PhD studentships to some of the researchers.