A Queen Mary University of London (QMUL) spin out company has received investment to commercialise a new material technology which would both drastically cut energy use and increase the speed of optical communications. 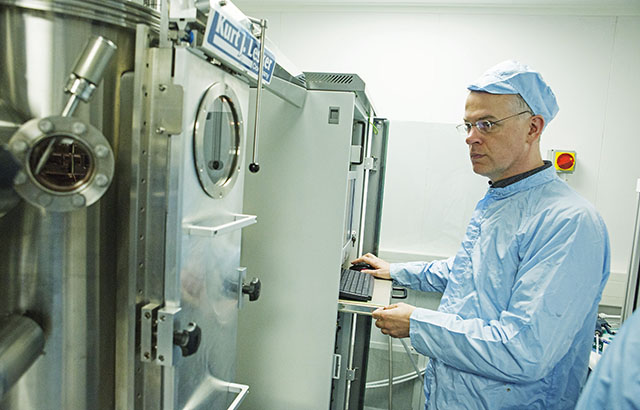 Chromosol, founded by Professor William Gillin, will develop technology to allow the manipulation of light directly on silicon chips, allowing them to communicate via pulses of light rather than electrical signals.

This would make communication between chips very fast whilst also reducing the power consumption.

The idea has been backed by IP Group, a developer of intellectual property-based businesses, which will work closely with QMUL throughout the development with the provision of both commercial expertise and financing.

Professor Gillin, Director of the Materials Research Institute at QMUL, said: “We’re delighted IP Group is supporting Chromosol and we look forward to working closely with them to commercialise our work.”

“Chromosol’s technology is easy to integrate and is compatible with the existing processing techniques, providing a simple solution to a growing problem.”

The technology could have a big impact on the energy use of data centres – large groups of networked computer servers typically used by organisations like Google and Facebook for remote storage and processing huge amounts of data.

Traditional copper cables, used for transferring data electrically, are stifling both data centre evolution and high-performance computing due to their slow transfer capacity and high energy consumption – the latter which results in the need for vast amounts of cooling.

It is estimated data centres now use around three per cent of the world’s generated electricity and produce about two per cent of greenhouse gas emissions.

Professor Gillin said: “Large amounts of energy are needed to move data electrically over relatively short distances. If we can remove the need for this electrical data transfer then the power requirements of data centres will be reduced dramatically.”

Optical communications are quicker and more energy efficient than the traditional copper infrastructure but previous attempts to launch products into this market have suffered from low yield of production, high cost of manufacturing, and complexities of integration onto silicon devices. Chromosol’s technology aims to address and alleviate all of these problems.