Proteins involved in the production and perception of pheromones may determine if red fire ant colonies contain a single queen or multiple queens. 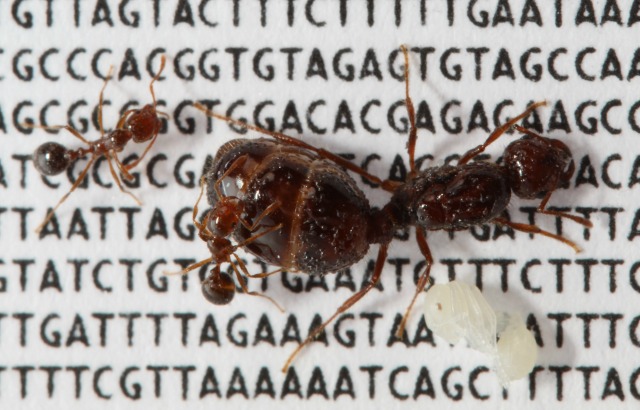 Solenopsis invicta fire ant queen (large), two workers (smaller) and a pupa (whitish) on a subset of the DNA sequence of their social chromosome. Credit: Romain Libbrecht and Yannick Wurm

These odorant binding proteins (OBPs) are encoded by genes which form part of a so-called social chromosome, according to researchers at Queen Mary University of London (QMUL).

Red fire ants are found in two different types of colonies - some colonies have a single queen while other colonies contain dozens of queens. The team had previously discovered that colony type is determined by a chromosome that carries one of two variants of a ‘supergene’ region containing more than 400 genes.

“We found that some of the odorant binding proteins are functional in one of the chromosome versions, but have mutations that make them non-functional in the other version”, said Dr Yannick Wurm, who leads the lab that performed this study.

“We also found other differences between the two chromosome versions. For example, some of the genes were functional in both versions of the chromosome, but their activity levels differed between the two types of colonies.”

The team hope that this finding will help them understand how ant colony workers perceive queens and regulate how the society is organised.

Rodrigo Pracana, a PhD student at QMUL and first author of the study, said: “In most species of ants, worker ants allow only one queen in a colony, killing any extra queen. In the fire ant, some workers do not kill queens that carry the correct version of the social chromosome. We think this happens because these workers recognise specific pheromones produced by the queens that carry this version the social chromosome.

“This study showed us that the odorant binding protein genes are potentially involved in the production or perception of these pheromones. We will now be able to hone in on these genes and find what each of them does.”

Dr Wurm added: “Pheromones are very important in ant and bee colonies, because they are the main way that workers and queens communicate with each other. Understanding how pheromones are produced and perceived in different individuals will allow us to understand how complex insect societies evolve and function.”

The red fire ant, which is a native species in South America, is infamous for its painful sting, and is known in many other parts of the world where its aggressiveness and high population density have made it an invasive pest. It was accidentally introduced to the southern USA in the 1930s and has since spread to many warm parts of the world including in China and Australia. Efforts at controlling the spread of this species have largely been unsuccessful, as indicated by its Latin name, Solenopsis invicta, meaning “the invincible”.

Rodrigo Pracana added: “Our discoveries could help to develop novel pest control strategies. For example, a pesticide that could disrupt pheromone production or perception in this species but not others would be beneficial because it would reduce unwanted side-effects in the environment.”