Scientists seeking to understand the origins of life have found a new organic compound in the material from which a star like the Sun is forming. 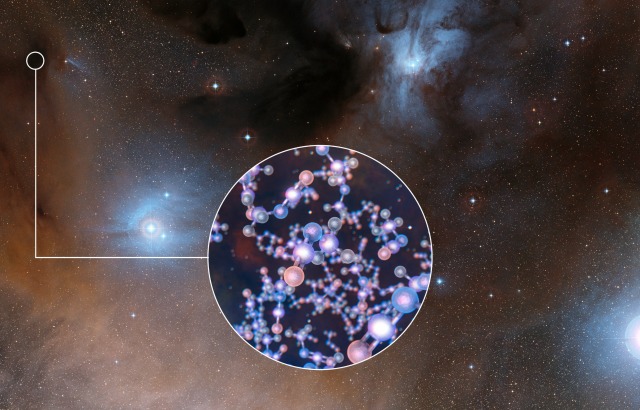 Researchers from Queen Mary University of London (QMUL) are part of a team that have for the first time detected methyl isocyanate (or CH3NCO) in a solar-type protostar, the kind from which our Sun and the Solar System formed.
Methyl isocyanate (CH3NCO) is one of a family of prebiotic molecules, thought to be the precursors of more complex compounds, such as peptides and amino acids, associated with living organisms on Earth.

“Our findings indicate that the key ingredients for the origin of life could have been produced at an early stage of the Solar System,” said co-author Dr David Quénard from QMUL’s School of Physics and Astronomy.

Cocoon of dust and gas

The team used data from the ALMA telescope (Atacama Large Millimeter/submillimeter Array) in Chile to detect the compound in the warm, dense inner regions of the cocoon of dust and gas around very young stars in the multiple star system IRAS 16293-2422.

Using a new computer model jointly developed by QMUL and University College London (UCL), they were able to use the new observations to understand more about the chemistry in the proto-stellar material and the mechanisms by which this complex molecule is formed.

Finding complex molecules such as methyl isocyanate in a solar-type protostar indicates that planets created around the star could begin their existence with a supply of the chemical ingredients needed to make some form of life.

Scientists believe that some basic prebiotic chemistry, involving molecules that form the building blocks of structures associated with life on Earth, could have developed in space. It is believed that molecules created in clouds of interstellar gas and dust during the early stages of star formation could be transferred to planets and smaller bodies (such as asteroids and comets) forming around stars.

Comets, for example, exhibit a wide variety of complex organic molecules that are also commonly detected in matter that lies between the star systems in a galaxy, referred to as the interstellar medium.

Co-author Dr Izaskun Jiménez-Serra from the School of Physics and Astronomy said: "Our results suggest that the chemical composition of comets may be inherited directly from the interstellar medium.”

The results are published in the journal Monthly Notices of the Royal Astronomical Society.