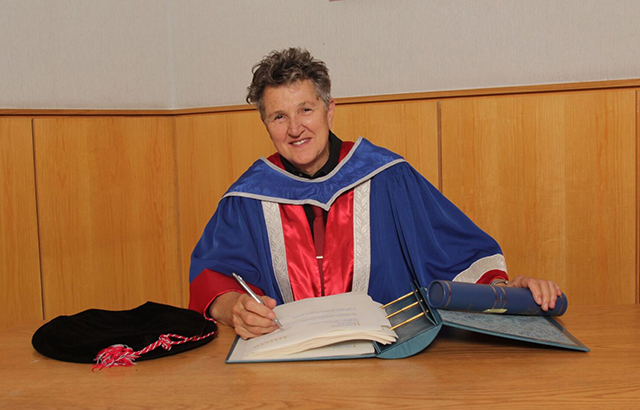 Peggy Shaw – Doctor of Letters (DLitt). Peggy Shaw is a Massachusetts born, New York based actor, writer and producer and one of the most important feminist and lesbian performance makers of the twentieth and twenty first centuries.

In the 1970s, Shaw was a member of influential New York fringe theatre companies Hot Peaches and Spiderwoman. In 1980, she, Lois Weaver (now QMUL) and others co-created the WOW (Women’s One World) International Festival of theatre. In 1983, they co-founded the WOW Café, an off-off-Broadway performance space dedicated to work by and for women. In 1981, Shaw, Weaver and Deb Margolin co-founded Split Britches Theatre Company.

Touring the USA and Europe, their feminist work immediately became iconic for intelligent, rigorous, playful, and sexy interrogations of dominant narratives and theatrical forms. Group shows include Upwardly Mobile Home (1984) and Little Women: The Tragedy (1988). Shaw and Weaver’s many duet performances include Lesbians Who Kill (1992) and Lost Lounge (2009). Shaw’s powerful solo performances range from You’re Just Like My Father (1994) to RUFF (2013), created in response to her 2011 stroke. Shaw’s many awards include three Obies (Off-Broadway awards), the 2014 Doris Duke Artist Award, a 2017 United States Artist Fellowship, and the 1995 Anderson Foundation Stonewall Award for ‘excellence in making the world a better place for gays and lesbians’.

Jeremy re-focused and enlarged the UK Space Agency programme to deliver a major package of educational activities in support of Tim Peake’s mission to the International Space Station, in which QMUL and many other partners were heavily involved. This programme has so far reached over 1.6m young people – roughly 15 per cent of all school children across the UK in 40 per cent of UK schools. The UK Space Agency funded QMUL to undertake high profile activities such as the Our Space project with British-born space commercialisation pioneer Richard Garriott, and the Principia Space Diary for primary school children written with Lucy Hawking, which was a finalist for the Sir Arthur Clarke Outreach and Education Award in 2017.

Professor Simon Peyton Jones – Doctor of Sciences (DSc). Simon Peyton Jones has been an inspirational figure in computer science for 30 years, recognised in 2016 when he was elected a Fellow of the Royal Society. He quickly rose to be a Professor at the University of Glasgow, moving to Microsoft Research in 1998. He was made a Fellow of the Association for Computing Machinery for contributions to functional programming in 2004, and Distinguished Fellow of BCS, the Chartered Institute for IT, in 2017.

Around 2007, observing the inadequacy of the school ICT education of his children, he formed Computing At School (CAS), a grassroots collaboration between teachers, academics and industry to support the teaching of computer science. QMUL was a part of this movement from the outset. Through CAS, he lobbied for a new school subject. Just as physics is taught to all and gives a rigorous understanding of the physical world, so should computer science be taught to all in order to give a rigorous understanding of the digital world. CAS has helped bring this about, and is an inspiration for countries worldwide who desire a similar transformation.

Simon has been a stalwart supporter of QMUL’s engagement work including our Computer Science for Fun project, our work for the Mayor of London, provision of Continuous Professional Development courses for Computing teachers, and our subsequent pan-London support network for teachers.