Erik Mathisen, Teaching Fellow at Queen Mary University of London, writes about the parallels between Donald Trump's presidency and that of Andrew Johnson, who served as the 17th president from 1865-69. 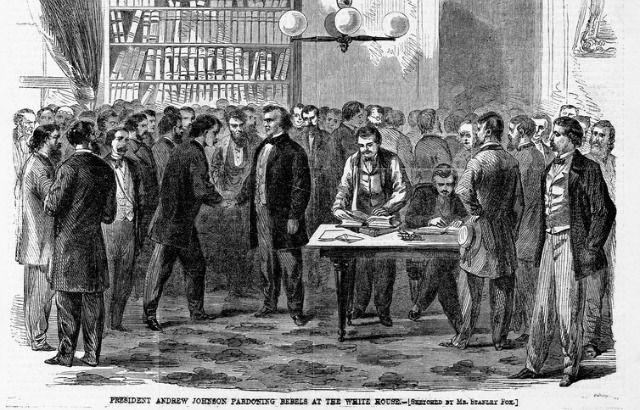 As the circus that is the Trump presidency lurches from one disaster to the next, some of the president’s opponents apparently believe he’s just one Twitter tantrum away from being thrown out of office. They ought to know better.

Impeachments are no simple matter: they are prolonged bloodlettings, constitutional proceedings furnished with all of the props of a legal hearing, but above all, political cage matches from which few competitors emerge unscathed. After Bill Clinton’s 1998-9 impeachment over the Lewinsky scandal, it was the Congressional Republicans who went after him that limped away wounded.

To be successful, impeachments require an extraordinary will on the part of a great many members of Congress. Given the Republican party currently controls both houses, it will likely not be until the midterm elections in 2018 that Democrats will have a chance to seize the initiative and press for Trump’s ouster – if indeed they are in a position to do so.

Nonetheless, the idea of a Trump impeachment is doing the rounds, and pundits are duly prodding historians for some guidance as to how it might work. There aren’t many precedents to go by – but the one that comes most easily to mind is Andrew Johnson, who served as the 17th president from 1865-69.

While Johnson did not come from money, he possessed many of the same political instincts Trump displays. Like Trump, Johnson was gladiatorial in style, quick to attack and given to goading his enemies. He also hamstrung his presidency with a dramatic miscalculation in the wake of the American Civil War: he mistook the wartime presidential powers of his office for a blank check, thinking he could go about the business of reunifying the nation in whatever way he saw fit.

Facing stiff opposition from a powerful Congress, Johnson was ultimately taken down by his detractors in an impeachment hearing. Though he was saved from complete disaster by a single vote in the Senate, his political career was in tatters before his trial even began, many of his opponents viewing him as downright unhinged and unfit for office.

When he died in 1875, his obituary in the New York Times said his greatest misfortune was to be next in line to the presidency when Lincoln was assassinated. “His posthumous fame”, it read, “would have been brighter without this high honour and the consequences it entailed.”

Beyond their likeness of character, what Johnson and Trump really share is a dogged belief in loyalty. Trump famously demands loyalty from his employees and associates, and has done so for decades. But while fealty to the boss and his wishes is hard currency in Trumpworld, the current president’s fixation on it has got him into serious trouble.

The most explosive loyalty-related revelation yet came when former FBI Director James Comey confirmed to a Senate committee that Trump explicitly asked him for his loyalty before pressuring him to back off from investigating the former national security adviser, Michael Flynn. Many Americans find this kind of back-room politicking deeply distasteful – and they have done for a very long time.

Johnson too considered loyalty a fundamental measure of an individual’s character, so much so that he put tests of loyalty at the centre of his plan to reunify the country after the American Civil War. In a series of presidential proclamations issued only weeks after the conflict ended in 1865, Johnson stipulated that all former members of the Confederate government and other groups, including wealthy slaveholders, had to submit to an oath of loyalty if they wanted to lay claim to rights as citizens of the postwar republic.

Johnson insisted on these oaths as a necessary measure to ensure the stability of the nation, and he made himself judge and jury over all of them. Between 1865 and 1867, his office was flooded with loyalty oaths, which came complete with often tortured testimonies from white southerners who expressed their regret at having divided the country.

What made these oaths so important to Johnson was the idea that personal pledges of allegiance were necessary acts of civic contrition, the only truly meaningful method of ensuring that citizens were devoted to the nation state. But in reality, they were blunt instruments.

No matter what transpires in the months to come, any talk of impeaching Trump will revolve around the same issue that derailed Johnson’s presidency: a transactional approach to politics. Just as Johnson believed that pardoned rebels would vote for him in a presidential election, Trump seems to believe that loyalty binds people to him and his presidency more strongly than high-minded idealism or political principle ever could.

Like many things in politics, impeachments are decided in the court of public opinion. A presidential impeachment requires that citizens deem a president’s judge and jury more loyal to the republic than the accused, meaning the toughest obstacle facing Trump’s opponents is Americans’ contempt for Congress.

Loyalty remains one of the most powerful ideas in American politics. Even if it is hard to distil and even harder to control, it is the animating principle of citizenship. Impeachment is a political battle of wills, but it’s also a battle over who the American people deem the more loyal to the country and its interests.

This article first appeared on The Conversation