Snap election a win-win for Theresa May: crush Labour and make Brexit easier 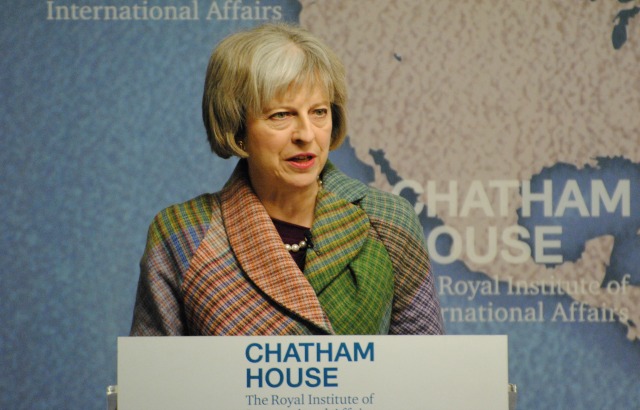 Theresa May at Chatham House

So Theresa May, it turns out, is only human. After months of denying she was going to do it, the British prime minister decided to call an early general election – first and foremost because she knows she’s going to win.

Indeed, she’s not just going to win; she’s going to win big. Contrary to common wisdom, bookies don’t necessarily know better than opinion pollsters when it comes to predicting political events, but they know a racing certainty when they see one. Within minutes of the PM’s announcement, one national chain was giving odds of 2/9 on an overall majority for the Conservatives, with Labour out on 14/1.

To those Corbynistas who think the public will warm to Jeremy and his policies once they see more of him: Not. Going. To. Happen. If the Labour leader and his team think they’ve had a raw deal from the media – and from the Tories – since he took over, they ain’t seen nothing yet. Even on a level playing field (and it won’t be one) they’d still stand no chance: they’re miles behind on the economy, serious difficulties in the NHS haven’t yet fed through electorally, and Labour is seen as neither trustworthy nor competent. Game over.

Everything, then, points to a thumping win for the Conservatives. It may be pushing it to predict their majority will run to three figures but it shouldn’t be ruled out – even without the changes to parliamentary boundaries that would have come in prior to an election in 2020.

Anyone arguing that the PM has somehow lied to the public by giving the distinct impression since July that she wasn’t going to call an early election should save their breath. The fact of the matter is this: people seem to like Theresa May – or at least respect her – but they see her as a politician not as some sort of saint. They know the game and they know she’s played it well – and that they’d probably have done the same in her position. I know I would.

True, there may be a bit more of a debate worth having on whether the public actually wants a general election so soon after the previous one and after the EU referendum. Indeed, I suspect they don’t and that that will mean a lower turnout – perhaps even lower than might be expected for a vote with such a certain outcome.

But turnout would really have to fall massively to substantially impact on the legitimacy of May’s new administration, and anyway any such deficit would doubtless be compensated for by her being able to claim the fabled “personal mandate” that all hitherto unelected prime ministers are said (with no good constitutional reason, mind you) to crave.

That, of course, isn’t the main reason she’s doing this. What this victory will give May (as well as the chance to crush Labour before it comes to its senses and gets itself a new leader) is a whole bunch of new Tory backbenchers who, whatever their views on Europe and other issues, will know full well that they owe their place on the green benches mainly to her. That almost certainly means that she will be less beholden to some of the ultra-eurosceptics on whom she would have otherwise have to have relied.

Obviously, there are so many factors involved in determining the eventual shape of that deal, but it seems fair to assume that we may be heading for a rather softer and transitional Brexit than might have been the case had the PM not decided to go sooner rather than later.

Absent an economic meltdown between now and 2019, what an early election will also do is dash once and for all the already fast-fading hopes of Remainers that Brexit might somehow be prevented. Although Leavers have forgotten it, the referendum result was tight. But the Lib Dems are the only party arguing that the UK should stay in the EU and they are likely to get around 15 per cent in this election at best. That will reinforce the idea that leaving really is the “the will of the people” – on the subject of which, it will, incidentally, be fascinating to see how UKIP does without Nigel Farage as its leader.

Finally, for Labour this is the good news, bad news election. Good news, centrists hope, because a big defeat should ensure the party sees the back of Corbyn. Bad news because few parties recover from a big defeat in just one parliamentary term – and because they still have to find someone halfway decent to replace him.