Robert E Lee, George Washington and the trouble with the American pantheon

Professor Erik Mathisen writes for The Conversation about the growing debate surrounding the Confederate monuments and how America now has to finally face its troubled history. 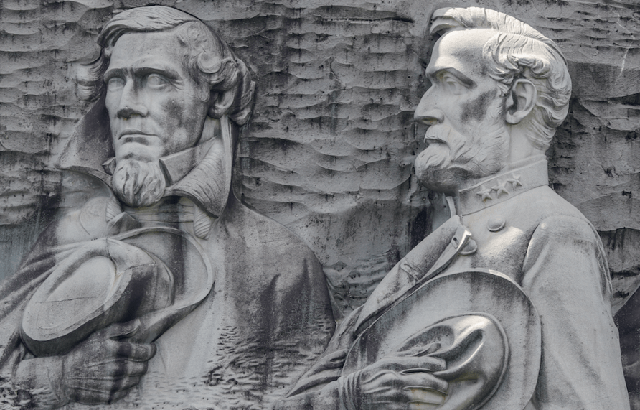 When the US president, Donald Trump, was asked to clarify his position on the violence that unfolded in Charlottesville, Virginia during a press conference at Trump Tower in New York, he poured gasoline on a raging fire.

In a comment about the historical monument to Confederate general Robert E Lee, which had become a flashpoint in the protests, Trump remarked: "This week it’s Robert E Lee … I wonder is it George Washington next week? And is it Thomas Jefferson the week after?"

For years, a debate about Confederate monuments has been growing in intensity, setting protesters and city counsellors around the country against activists who see the monuments to southern civil war heroes as a part of the region’s heritage – even though the majority of them were erected long after the war. Indeed, most were put up around the beginning of the 20th century, as African-American disfranchisement began to well and truly bite across the country and in the 1950s and 1960s, largely in reaction to the civil rights movement and desegregation. Though they might hold a civil war figure aloft, monuments to the Confederacy commemorate white supremacy in marble. This is the message. The rest is historical window dressing.

A few of these statues make this fact plain. Most do not. All of them trade in a historical bait and switch. The statues memorialising the Confederacy gave segregationists the historical justification they needed to act, while at the same time allowing them to cast their efforts in a regional history of lost causes rather than white supremacy and the perpetuation of slavery.

But Trump’s stance also raise questions about not so much whether monuments ought to be taken down, but the company that Robert E Lee keeps in the pantheon of the republic’s most important civic icons. Here too there are problems, but not only the ones you might think.

On the surface, the president’s remarks make no sense to anyone who has read in any depth about American history. Thomas Jefferson wrote the document that set the American colonies down the road to independence. He was a president, as was George Washington. Lee was a decorated soldier – but a founding father he was not. He renounced his citizenship, joined a cause to break up the Union and stood at the head of the Army of Northern Virginia which inflicted incredible damage on the United States and killed tens of thousands of American soldiers. Washington and Jefferson helped to build the republic. Lee was out to destroy it.

However, one of the odd and understudied by-products of the war is that, despite the all-consuming talk of treason and loyalty during and immediately following the conflict, by the later decades of the century former Confederate citizens could wrap themselves in the American flag and still erect monuments to their Confederate heroes, all without irony or sanction from the rest of the country.

For a good many Americans, Lee is held up as a national hero – even if he had a hand in almost tearing the republic to pieces. The historical narrative that wraps Lee, Washington and all the rest into one whole is a story of misdirection. It is a memory of the war that few who survived the conflict would have recognised. And it is certainly not how those who were slaves when the war began remembered it.

But there is more to think about here. By associating Lee, Washington and Jefferson, Trump made an unintended but instructive point about the problem of whiteness, slavery and power in American history more broadly.

For all of the plaudits historians and the broader public throw at the feet of the so-called founding fathers, there is something to the idea that by holding them up and casting aspersions on Lee, we are somehow scrubbing up the former, and heaping scorn on the latter. The fact remains that most of the most powerful Americans in the first century of the republic’s history traded in slaves or profited from their labour. Few institutions were untouched by slavery’s influence. Though white nationalists might deny it, it is difficult to point on a map to any part of the United States that was not settled, improved or made profitable through the labour of African Americans in chains.

Trump was by no means out to make this point, but in his profound desire to lash out at his enemies and expose their weaknesses, his words inadvertently ought to force historians and the broader public to think again – and think again a lot harder – at the historical assumptions we make. No monument erected or destroyed can obscure the reality that racism remains one of the most powerful markers in American society. A darker reckoning with the nation’s history is sorely needed.