For the first time, the sole surviving manuscripts of the most celebrated works of William Godwin (1756 – 1836) will be digitised and made freely available on the Shelley-Godwin Archive as part of a collaborative project announced today by Queen Mary University of London (QMUL), the Victoria and Albert Museum (V&A), and Maryland Institute for Technology in the Humanities (MITH). 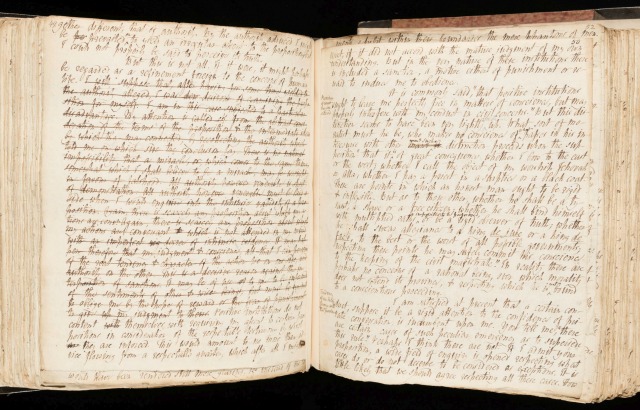 William Godwin was an English radical political philosopher of the French Revolutionary era. He married Mary Wollstonecraft, the early advocate of women’s rights, but lost her shortly after the birth of their daughter Mary, who grew up to marry Godwin’s disciple, the poet Percy Bysshe Shelley, and to write Frankenstein.

Godwin shot to fame with a massive book, An Enquiry Concerning Political Justice (1793), now seen as a founding text of philosophical anarchism. He rejected all forms of political authority in favour of justice, equality, and mutual moral accountability. The rule of law would be replaced by the rule of reason. Godwin’s greatest novel, Caleb Williams (1794), was the first detective thriller in the European narrative tradition. A study in power relations, it dramatised the impact of tyrannical government on the ordinary individual.

Under the leadership of Professor Pamela Clemit of QMUL’s School of English and Drama, one of the world’s most renowned Godwin scholars, the original handwritten manuscripts of these two epochal works will be digitised for the first time and made freely available worldwide.

These treasures are held at the V&A in London, in a vast archive of literary manuscripts. The V&A will undertake conservation and photography, and will host a public event in September 2017 to launch the new electronic publication.

MITH, one of the world’s leading digital humanities centres, will publish images of the manuscripts on the Shelley-Godwin Archive. This electronic resource is making freely available the digitised manuscripts of William Godwin, Mary Wollstonecraft, Percy Bysshe Shelley, and Mary Shelley, reuniting online the handwritten legacy of one of England’s most important literary families. 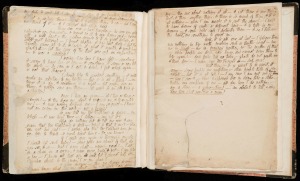 “MITH is excited to be working on this project with two such distinguished partners, and we look forward to publishing images of these momentous texts,” said Professor Neil Fraistat, Director of MITH and a General Editor of the Shelley-Godwin Archive.

Professor Clemit said: “Digitising the manuscripts of Godwin’s most celebrated works will make it possible for everyone to experience the thrill of using the original documents without visiting the archive. Both manuscripts contain extensive revisions, providing a unique record of what was sayable at a particular historical moment.

“These are works of political protest, written during a government crackdown on freedom of speech in the aftermath of the French Revolution. One of them imagines a better future; the other dramatises the experience of living in a world of inequality, hardship, and injustice. They have a special appeal in turbulent times like our own.”

Professor Bill Sherman, the V&A’s Director of Research and Collections, said: “We are delighted by this partnership between the world’s largest museum of art, design, and performance, and academic leaders in the fields of literature and digital humanities. The project will introduce new readers to two of the most powerful and enduring literary texts in the V&A’s manuscript collections.”