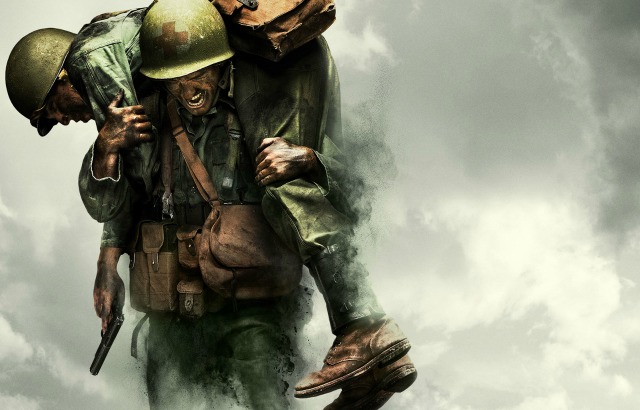 The Doomsday Clock offers a countdown to possible global catastrophe and currently reads three minutes to midnight, equal to the threat level seen at the height of the Cold War. Tensions are high in the South China sea and North Korea is developing nuclear weapons. Relations with Russia are fraught and the wars in Iraq, Afghanistan and Syria drag on and on. With Donald Trump’s finger now on the nuclear trigger the risk of further, possibly apocalyptic war, has risen even higher. In spite of this existential threat, pacifism is a dirty word in the wider political culture. So surely what we need right now is some intelligent articulation of genuine anti-war points of view?

Although Doss volunteered for the army, he refused to carry a rifle or take life yet still managed to earn a Congressional Medal of Honour for single-handedly rescuing 75 comrades during fierce fighting on the Japanese island of Okinawa. Doss’s story is replete with dramatic progressive potential.

But Gibson’s film fails to deliver. Although its first act is focused on Doss’s early life, we learn next to nothing about the tenets of Seventh Day Adventism, the religious faith that informed his worldview. His refusal of violence is depicted as personal rather than principled, a response to specific life events rather than religious reflection and conviction. As such, his position seems to emanate from within rather than belonging to a wider institutional, and potentially oppositional, framework of belief. Here the personal is definitely not the political.

The film also fails to show any convincing contradiction in the military context. The men in Doss’s platoon bully and beat him, and this behaviour is condoned by the army, but these scenes serve only as backdrop to Doss’s stoicism rather than any genuine attempt to show how his beliefs precipitate an institutional crisis. The central court martial scene – which had the potential to explore the ways in which Doss’s principled commitment to his beliefs demanded an uncomfortable and reluctant accommodation of his difference by the military – is pure Hollywood hokum and a lost opportunity.

The film’s battle scenes follow the well-worn groove established by Saving Private Ryan and others; viscera spill and spatter, legs are torn to tattered shreds, and men fall like pins in the face of Japanese machine-gunners. Here the horror of the battlefield is used to set in stark relief the stoicism, selflessness and courage of the American troops.

One would expect Doss’s role in the battle to create contradiction. But instead he becomes a facilitator, servicing the war machine and ensuring it prevails. The technically bravura filmmaking in these scenes has grievous injury, pain and death as a crucible in which the conservative values of family and faith (via Doss and his wife) and firepower (via the resolve of the wider group) are forged.

To maintain the position of a religious pacifist as enabler of military effectiveness the film does an appalling disservice to Doss’s memory. Doss rescued a number of wounded Japanese troops from the battlefield, dragging them to safety and lowering them down a ridge to be treated by US medics. This inconvenient fact is acknowledged but a casual aside implies that these prisoners were summarily executed, and the audience is solicited to consider this wholly justified.

This choice belies the one-sidedness of the film as a whole, which apes World War II propaganda in its depiction of the Japanese as faceless, insane and animal-like. Indeed, after a number of bloody setbacks, US forces prevail and the scenes of the Japanese being defeated play as revenge. It is hard to imagine anything further from Doss’s belief that violence must be resisted at all costs than these graphic scenes of payback.

Doss’s refusal to bear arms is shown to be a personal choice that doesn’t threaten the wider system. He is a patriot aligned with US war aims who works tirelessly to ensure that the army prevail. And the army is shown to accept, and even defend difference, as long as that difference is thoroughly able to be assimilated.

As a result, the film subsumes a potentially radical anti-war voice within a film that is consonant with the wider racist, nostalgic, militaristic and patriarchal political culture emerging around the figure of Trump. Ultimately, Hacksaw Ridge contains the radical potential of Doss’s story, turning him from conscientious objector to conscientious collaborator, and in doing so reinforces a jingoistic political culture in a time of grave danger.