130 years of the People's Palace [Podcast]

The heritage of Queen Mary University of London can be traced back to the late 19th century with the establishment of the People’s Palace, a philanthropic organisation designed to bring culture, recreation and education to the East End. 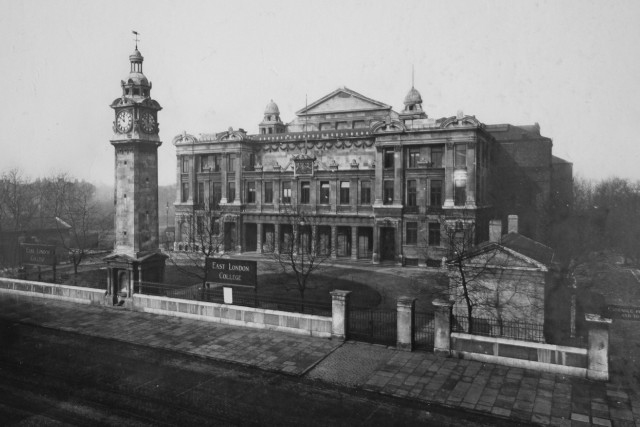 Its founders set out to inspire and delight the local community with a vibrant calendar of social events and facilities, including swimming baths, concerts and a winter garden enclosed in glass.

2017 marks 130 years since the foundation of the People’s Palace in Mile End. In this podcast, QMUL’s Lis Parham speaks to social historians Dr Nadia Valman and Professor Alastair Owens about Victorian values in the old East End, wider social changes that were happening in the 1900s, and the origins of the university.

Find out more about the history of Queen Mary University of London.

Alastair Owens is Professor of Historical Geography in the School of Geography where he has taught since 2001. He took his first degree at King’s College London before completing a PhD at Queen Mary in the late 1990s. A previous winner of the College’s Drapers’ Award for Teaching, Alastair lectures across the human geography programme at Queen Mary, leading a popular third year course on Victorian London and another on the north American city of Boston, which includes a field trip to that city. His research examines families, gender and wealth in late nineteenth- and early twentieth-century Britain; material culture and domestic life in Victorian London; and the history of child welfare. Professor Owens is based at the School of Geography.

Dr Nadia Valman is a scholar of nineteenth and twentieth-century urban literature. She has taught at Queen Mary for 10 years, where she has developed innovative courses using guided walks to explore the literature of London from Charles Dickens to Monica Ali. Her recent publications examine the Victorian East End novelist Israel Zangwill and she is the author of Zangwiil’s Spitalfields, a walking tour app. Dr Valman is based at the School of English and Drama.