Study reveals the effect of genetic ‘knockouts’ on human health

Only a fraction of genes appear to be essential for human life, according to researchers from the East London Genes & Health project, working with Born in Bradford and others. 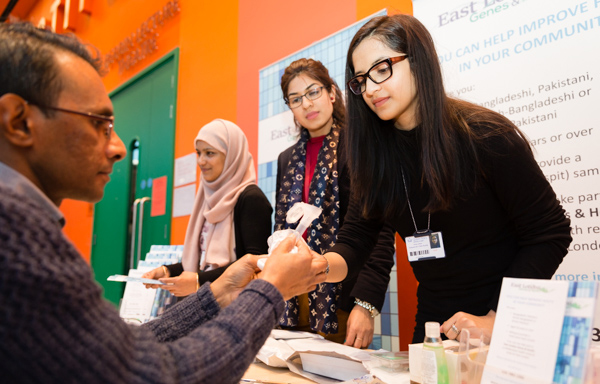 The study, published in Science, found that individuals with certain inactive genes, or ‘knockouts’, did not have any related adverse health effects.

During fertilisation, humans inherit two copies of every gene, one from each parent, so that if one copy is inactivated, the other may make up for it. When two inactive copies are inherited, this is called a ‘knockout’.

Sometimes, having a gene knocked out has no effect, as a separate protein may have a similar function to the inactivated one. In other cases, a knockout has the potential to offer an advantage or a disadvantage.

While scientists often use knockouts in mice to understand the function of genes, the effect of knockouts in humans is less well understood. Studying naturally-occurring gene knockouts can therefore help reveal the effects of gene inactivation in humans.

The researchers studied the genomes of 3,222 British Pakistani-heritage adults with high parental relatedness, and found knockouts present in 781 genes. Two thirds of these adults were from the Born in Bradford study.

Linking the genetic data to lifelong health records, they found that the knockouts had no association with health status, when looking at rates of medical consultations or drug prescriptions.

“We suggest that many previous genetic studies may have overestimated or inaccurately estimated risk of disease given a genetic variant, when taken into larger populations.”

Dr Richard Durbin, who co-led the study at the Wellcome Trust Sanger Institute, said: “Studying healthy people with related parents allowed us to estimate that only around 3,000 of the 20,000 human genes are essential for life.”

The team also carried out an in-depth study of a knockout in a gene involved in how sperm and eggs develop into embryos. While knockout of the PRDM9 gene can lead to infertility in mice, one person in the current study had a knockout in this gene but was healthy and fertile, suggesting for the first time that humans do not require this gene.

Richard Trembath from King’s College London and co-lead for East London Genes and Health said: “This initial study demonstrates that profound insights into health and well-being can be gained through sequencing the DNA code of large numbers of individuals, drawn from across a range of heritages.”

Born in Bradford’s Director, Dr John Wright, said:  “These exciting results, demonstrate the power of the Born in Bradford cohort study to contribute cutting edge scientific knowledge through linking the small data from our genes to the large data of our health records. The race is on now to identify gene knockouts that can shape the treatments of the future.”

East London Genes & Health is one of the world’s largest community-based genetics studies, aiming to improve health among people of Pakistani and Bangladeshi heritage in East London by analysing the genes and health of 100,000 local people.

The study was funded by the Wellcome Trust, Barts Charity and Medical Research Council.