Mutations present in a blood cancer known as follicular lymphoma have revealed new targets for potential treatments, according to researchers at Queen Mary University of London (QMUL) together with collaborators at the Whitehead Institute for Biomedical Research and Massachusetts Institute of Technology. 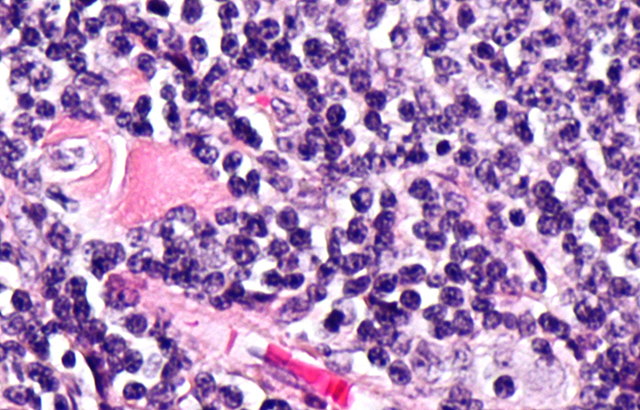 Follicular lymphoma is a common type of blood cancer and one of the most common non-Hodgkin lymphomas, with more than 2,500 people diagnosed in the UK every year. While the condition is normally responsive to existing therapies, the cancer often returns frequently and eventually develops resistance. For some, the cancer becomes more aggressive and difficult to treat.

Dr Jessica Okosun from QMUL’s Barts Cancer Institute said: “One of the mutations that we have identified allows follicular lymphoma tumours to turn on growth signals regardless of whether nutrients are available, thereby evading normal restrictions on its growth.

“Remarkably, the mutations we have discovered have not been seen in other cancer types. However, drugs that directly target this nutrient-sensing mechanism are currently used to treat other types of cancer, and may benefit patients with follicular lymphoma.”

The research, published in Nature Genetics, identified mutations in several parts of the body’s nutrient-sensing system, called ‘mTOR’, which occur in 30 per cent of follicular lymphoma patients. This pathway is switched on when there is sufficient ‘food’ available for a cell to grow and survive. While more research is needed, the team have shown that mutations in one of these genes keeps the growth signal switched on regardless of the availability of nutrients.

Inhibitor drugs that directly target the mTOR pathway are currently used to treat other types of cancer. The researchers say that these drugs may benefit patients with follicular lymphoma, particularly those who harbour mutations in that pathway.

The original mTOR inhibitor called rapamycin was discovered in the 1960s in the soils of Easter Island, when it was found to be an effective anti-fungal agent. Newer mTOR inhibitors have more recently been shown to be able treat some forms of cancer, and could be a candidate for further testing against follicular lymphoma.

The study was funded by Cancer Research UK and the Kay Kendall Leukaemia Fund.