The UK and Irish governments are being warned that they should do more to protect school children from injury, including head trauma, while playing rugby. 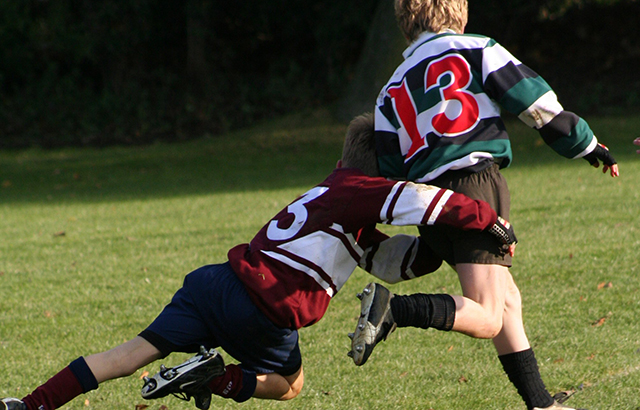 As the Six Nations continues, over 70 academics, doctors and public health professionals have sent an open letter to Ministers, Chief Medical Officers and Children’s commissioners to request a ban of the collision elements of rugby within British school systems, so that children play touch and non-contact rugby.

In the open letter, which was coordinated by academics from Queen Mary University of London and the University of Winchester, they write: “Rugby is a high-impact collision sport. Studies show that the risks of injuries for those aged under 18 years are high and injuries are often serious.

"Second, many secondary schools in the United Kingdom deliver contact rugby as a compulsory part of the physical education curriculum from age eleven. Third, the majority of all injuries occur during contact or collision, such as the tackle and the scrum. These injuries which include fractures, ligamentous tears, dislocated shoulders, spinal injuries and head injuries can have short-term, life-long, and life-ending consequences for children.”

Research also points to the tackle being a particular cause for concern. In youth rugby, tackles were found to be responsible for up to two thirds (64 per cent) of all injuries1 and 87 per cent of concussions2. Meanwhile, rugby union is being taken into 750 state secondary schools3 with the aim of reaching one million children.

One of the signatories of the open letter is Professor Allyson Pollock from Queen Mary University of London and author of the book Tackling Rugby - What every parent should know about injuries which summarises the current state of evidence on the topic. She said: “Parents expect the state to look after their children when they are at school. Rugby is a high-impact collision sport and given that children are more susceptible to injuries such as concussion, the absence of injury surveillance systems and primary prevention strategies is worrying. Children are being left exposed to serious and catastrophic risk of injury.

“As a signatory to the UN Convention on the Rights of the Child, the UK and Irish governments should ensure the safety of rugby, by removing the contact from the children’s game in schools.”

Another signatory, Professor Eric Anderson, from the University of Winchester and author of 21st Century Jocks, said: “Our contention is not with Rugby, there are many positive things that come from this team sport; our contention is with the collisions that occur in rugby. School children should not be forced to collide with other children as part of the National Curriculum for Physical Education. A more sensible approach is to play tag rugby.”

Doctoral student Adam White, who also sits on the Executive Committee of the England Rugby Football Schools Union, says: “It is increasingly difficult as a schools rugby administrator to ignore the harm young people are facing in contact rugby. We wouldn’t accept the risk of traumatic brain injury in any other element of the curriculum, so why do we allow it in PE? All of the benefits of the game can be obtained in tag rugby; children who want to play the tackle version can join a club.”

The authors of the letter have launched an online petition to replace contact with touch in school rugby.