Many thousands of people who have lost their lives to brain tumours were remembered as a minute’s silence was observed at Queen Mary University of London (QMUL) to mark national Brain Tumour Awareness Month. 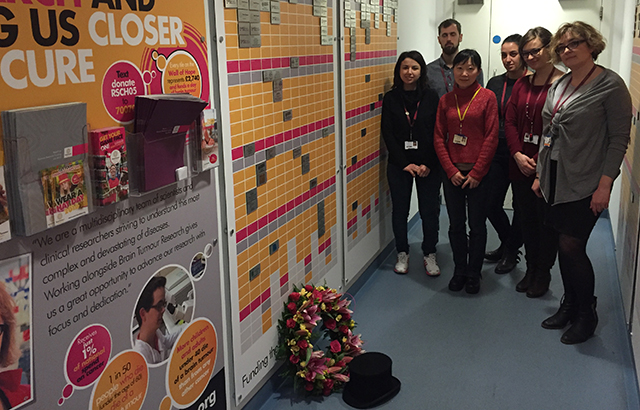 The tribute was led by the national charity Brain Tumour Research and saw scientists and researchers at its Research Centres of Excellence pause to reflect on lives lost and to think of those battling the disease.

Brain tumours kill more children and adults under the age of 40 than any other cancer, yet has received just 1 per cent of the national spend on cancer research over the last decade.

The Research Centre at QMUL’s Blizard Institute fell silent when the charity’s research team, led by Professor Silvia Marino, laid a wreath at the centre’s Wall of Hope, which provides a permanent tribute to loved ones.

Professor Marino said: “Since Brain Tumour Research was launched in 2009, the Brain Tumour Community has been devastated by the loss of thousands of loved ones to a brain tumour. We want to remember them all and highlight the desperate need to improve outcomes for the 16,000 people who will be diagnosed this and every year, and increase the national spend on funding into brain tumour research.”

This tribute marks the start of Brain Tumour Awareness Month which culminates on 24 March with Wear A Hat Day.