Behind the beauty a TB epidemic is raging

In this blog post, QMUL's Dr Jess Potter reflects on the scale of Cambodia's hidden TB epidemic and what she is experiencing on her trip through rural communities with RESULTS UK. 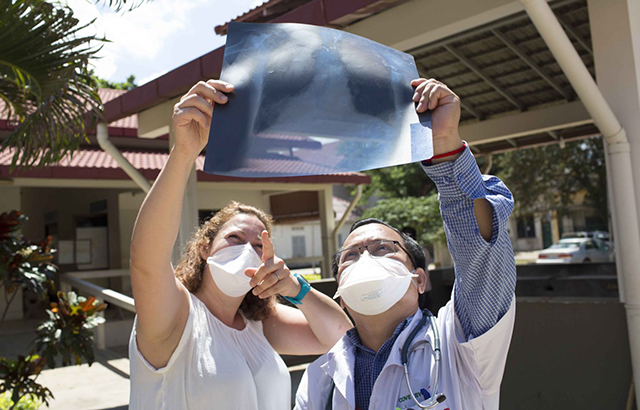 The Cambodia I have experienced so far is magical.  With its unwaveringly hospitable people, lush flat lands dotted with palm trees, brightly coloured houses on stilts and the landscape punctuated with majestic temples glistening gold in the morning sunshine – you can’t help but be intoxicated.

But behind this beauty a tuberculosis (TB) epidemic is raging.  Ravaged by decades of war, the Paris Peace accord was only signed in 1991 and it has only been since then that Cambodia has really started to get back on its feet.

Despite improvements however, Cambodia remains one of the highest TB burden countries in the world with an incidence of 390/100,000 population in 2014.  This has improved significantly over the past 10 years with a move to a community based approach to TB case finding and treatment services.

After hearing from doctors working at the National Centre for Tuberculosis and Leprosy (CENAT) we head off to the provinces to meet community health care workers and patients themselves.  It takes at least an hour before we finally leave the sprawl of Phnom Penh and the flat, luscious green fields open out on either side.  We are in the Mekong Delta along the Vietnam-Cambodian border.  The poverty here is stark.  Entire families of 10 or more live under one roof in huts on stilts.  We do not have to travel far between houses to find our next patient with TB.

We drive along single track roads made of clay that threatens to wash away with the heavy rains.  At the end of a dirt road we reach a collection of motorcycles, bikes, a couple of cars and a mass of people huddled under a couple of trees, beneath a roofed hut and in a half-built temple.  Today is a religious day and people are convening to worship and the health workers are taking advantage of such a large crowd.

We join them for an animated session discussing TB during which we cover symptoms, treatment and stigma (“TB is just another infection and so there is no problem sharing the diagnosis” many patients and their families tell us over the next few days).  Afterwards we sit on the floor with a bag of sputum pots and a large register and collect samples from anyone who is worried they have TB. 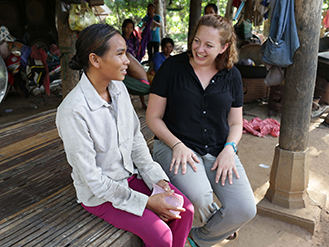 Meanwhile outside, a health clinic is taking place under a tree and medicines for malaria and multivitamins are handed out.  This is bringing your health service to the community and it was this strategy that has helped reduce the number of cases left undiagnosed with the potential for death or transmission.  Sadly this type of service is not available ubiquitously in Cambodia due to a lack of funding.

The first patient we meet is Pham Anyang.  As we arrive he is standing on top of the roof, clearly in the middle of building a house.  He is four months into treatment for pulmonary TB and has just gone back to work.  Many of the patients we meet are young men, pulled out of work due to illness.  He is a prime example of why ending the global TB epidemic will not only benefit individuals and prevent transmission amongst communities but also helps the economy.

Cambodia is lucky – there is strong political support for the national tuberculosis programme (NTP) as well as great leadership.  The Global Fund contribute approximately 50 per cent of the NTP annual budget.  This funding has helped increased the number of treated cases from 22,000 in 1990 to 130,000 in 2015. Mortality rates are down but still shocking - 58/100,000 population.

Kampong Provincial Hospital, where we visit later in the day, processes TB samples for one third of the country – 5 million people – but it is unlikely to be able to continue to provide drug sensitivity testing, vital to detect drug resistance, without further funding.  Even now they are out of liquid culture, need a new filter to help maintain negative pressure to protect the laboratory workers and are processing a third fewer samples than a couple of years ago due to the drop off in active case finding.

So, whilst money contributed by The Global Fund has gone a long way in helping Cambodia revolutionise the way they deliver their TB care, further support is needed just to maintain the good work that has already started and even more if we are to improve the situation here and achieve the WHO target of ending TB by 2035.