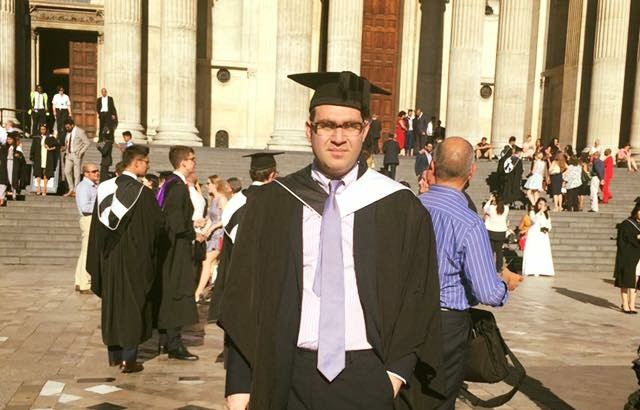 Marinos Koulouroudias, who studied at Barts and The London School of Medicine and Dentistry, part of QMUL, was the successful winner of the annual competition for London medical school students.

In addition, QMUL graduates Ahmed Al-Baiyya and Noor Khalid Mohammed Al-Ani Sharif were both awarded the ‘Runner up’ award for Dentistry.

The Gold Medal examination is held annually to identify the medical and dentistry candidates who have most distinguished themselves at their final examinations.

Marinos competed against over 20 of the best medical students in London, and faced a panel of six Professors, to answer a range of intricate questions on Obstetrics/Gynaecology, Pathology, Paediatric Surgery, General Practice, Pharmacology and Medicine.

On receiving the award, Marinos said: “There is very little one can do in the way of preparing for such an exam. There is no syllabus and no past papers. Members of the academic faculty at Barts had been exceptionally helpful in coaching me, but I think the most important determinant of my success was the sum total of my interactions over the past six years with lecturers, colleagues, doctors, and above all, patients and their families.

“The Gold Medal is a glittering recognition of potential and hard work. But what I really want to achieve in my future is compassionate care in my clinical work, and advancement of our collective knowledge in my academic work.”

Marinos plans to stay local in North East Thames to complete an Academic Foundation Programme in Barts Health NHS Trust for the next two years, and is hoping to combine an academic and clinical career in the field of Cardiology.

Noor Sharif described the experience as one of the best during dental school: “It’s daunting at first to think that you have to go back to revising. There wasn’t much that both of us couldn’t answer, as the university definitely prepares you well. It’s the confidence which they’re looking for not just the knowledge as most will have that. It’s an amazing experience".