East London school kids updated Igor Stravinsky’s The Soldier’s Tale with rap battles and their own melodies and rhythms in a performance at Queen Mary University of London (QMUL) on 9 February. 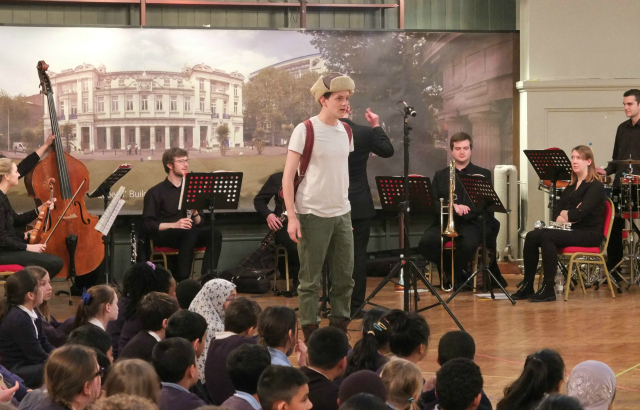 Stravinsky’s masterpiece was the inspiration for the creative education project in which three local primary schools (Malmesbury Primary School, John Scurr Primary School and Chisenhale Primary School) spent several weeks working with musicians and actors from East London Music Group, as well as volunteer students from QMUL, to develop new performance material which was inserted into the original.

The Soldier’s Tale tells the story of a soldier on leave who crosses paths with the Devil who then persuades him to swap his cherished violin in return for a book which will show him how to obtain all that he can desire.

The project was performed in front an audience of hundreds of school kids, parents and teachers inside QMUL’s The Octagon. It centred around the conflict faced by the soldier, with the school kids joining in the narrative by singing, acting, playing instruments and even jeering the devil on the odd occasion.

Paul Edlin, QMUL’s Director of Music, said: “The performance was absolutely fantastic and it really gave the children, who were performing and watching, an opportunity to engage with Stravinsky’s work in a fun environment. Hopefully the project will inspire them to take part in more musical projects at school.”

With over a hundred performers taking part the event required close co-ordination and was made possible by Jo Gibson, the Project Leader; Matthew Hardy, the Artistic Director of East London Music Group; and Paul Edlin.

The performance was part of QMUL’s newly launched season of music for spring/summer 2016 which celebrates musical talent from within QMUL, around Tower Hamlets, and brings professional musicians on campus to perform.

More details and a full programme of events can be found here: http://www.music.qmul.ac.uk/concerts-events/