QMUL celebrates the success of its international scholars

Queen Mary University of London (QMUL) celebrated the success of its international students who received prestigious scholarships to study in 2015-16, at a reception which brought together students, embassy officials and scholarship body representatives from around the world. 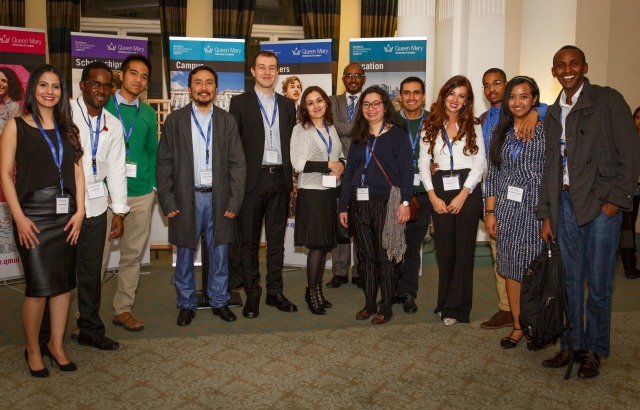 Over 100 scholars from more than 50 nationalities attended the International Scholars Reception on 15 March 2016. They were joined by staff from the embassies and representative offices of China, Egypt, Indonesia, Iraq, Japan, Kazakhstan, Malaysia, Mexico, Russia, Saudi Arabia, Singapore, Taiwan, Thailand, Turkey and UAE. Representatives from Chevening and the Commonwealth Scholarships Commission, Santander Bank, and QMUL departmental staff also attended the event at the university’s Mile End campus.

The event was organised to recognise and honour the important contributions made by the university’s international scholars. QMUL is home to around 6,000 international and 1,900 EU students from over 150 different countries. It is committed to working with a range of overseas partners, including overseas higher education institutions and scholarship bodies, to ensure that international students have access to the best possible educational, cultural, and experiences on offer at QMUL.

Professor David Sadler, Vice Principal (International), hosted the event and commented: “QMUL is an increasingly attractive destination for international scholars, thanks to our global position as a leading research-intensive institution, a centre for teaching excellence, and a member of the Russell Group of UK universities. We are proud of our international scholars and hope they have a rewarding experience here, one which will bring very significant benefits to their future lives and careers and also to QMUL’s links worldwide."

Frankie Clarke, Programme Officer at the Chevening Secretariat, said: “Chevening enjoys a long standing relationship with QMUL and it’s so encouraging to see it go from strength to strength. It was great to be a part of the International Scholars Reception and to see so many of the 63 Chevening-QMUL scholars there.”

Vanessa Worthington, Programme Officer at the Commonwealth Scholarship Commission (CSC) said: “Thanks to support from QMUL, the CSC has funded 4 Commonwealth Scholars to study at the university in the 2015-2016 academic year, in subjects ranging from Law to Telecommunication and Wireless Systems.  It was a pleasure to meet so many of them at the event, and we look forward to continuing to work with QMUL in the future.”