New festival to bring together communities in east London

Queen Mary University of London (QMUL) is jointly hosting a two-week festival which celebrates and brings together communities in the East End through a series of events. 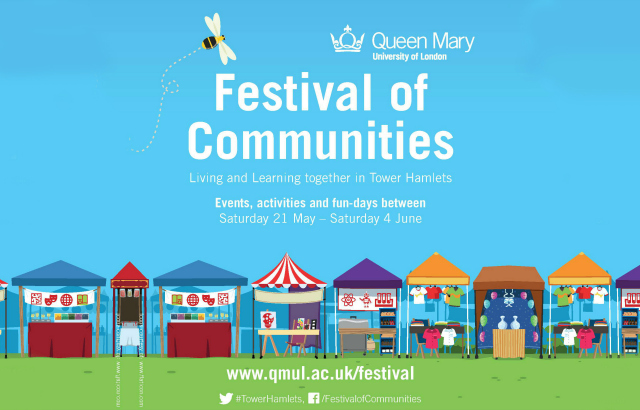 The inaugural Festival of Communities started on Saturday May 21 with a family fun day in Stepney Green Park and is being run in close collaboration between QMUL, Tower Hamlets Council and community groups in the borough.

On the opening day visitors had the chance to get up close to a full-size tyrannosaurus rex skull and speak to experts about it, recreate the universe with Lego physics and have a go at a pedal-powered smoothie bike.

Throughout late May and early June a series of fringe events are also being held including walking tours tracing migrant lives in Whitechapel, a debate on the Olympic legacy in east London, film screenings and music therapy with 16th and 17th Century ballads.

The festival will conclude on Saturday June 4 with an event at QMUL’s Mile End campus showcasing the best of the university’s research including naked mole rat street art, science workshops by the team at Centre of the Cell and a circus-themed carnival of lost emotions.

Sarah Gifford, Community Engagement Officer at QMUL, said: “We are really excited about the first Festival of Communities and the range of activities and events taking place over the two weeks. There really is something for everyone to get involved with and there will be lots to explore so hopefully it will give people a chance to get hands on learning about the university and their local community and inspire them to take their interests further.”

Festival of Communities has a focus on ‘life’ and throughout the two weeks will explore the themes of lifelong learning and community togetherness.

For more details on the festival head to http://www.qmul.ac.uk/festival/.