The Irish men who mapped the British Empire

A new book by Charles Drazin from Queen Mary University of London (QMUL) takes the reader on a historical journey from a small village in rural Ireland to the farthest flung outposts of the early twentieth century British empire. 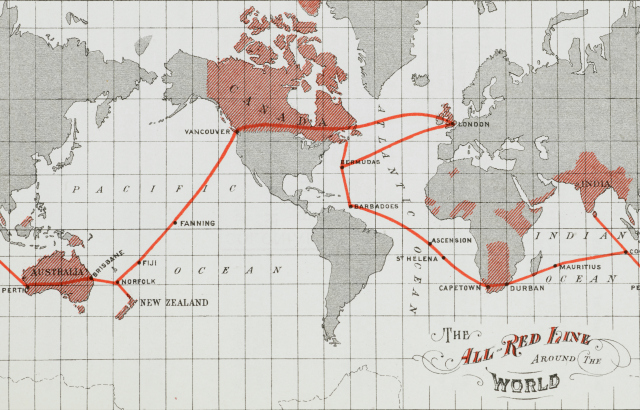 Mapping the Past begins with the death of Charles’ Irish-born mother; Patsy. The book tells the story of five young Royal Engineers – the author’s grandfather and great uncles – as they travelled the globe mapping the British Empire, in the height of its pre-war pomp.

“I knew very little about my mother’s childhood in Ireland, and almost nothing about her father Patrick. I was aware that he’d been a Royal Engineer, and I knew of course that he was Irish – but I had no idea what a fascinating life Patrick and his brothers led, and I had only the vaguest sense of how Patrick’s death affected and stayed with my mother,” said Charles.

When his mother died, Charles began to go through the relics of her life. They included a box of old photographs, a battered suitcase stamped with the initials of the grandfather he had never known, and the service records of Patrick’s brothers, who, like him, had all enlisted in the Royal Engineers as the nineteenth century became the twentieth. So began an extraordinary journey of discovery that took him from the age of Queen Victoria to the battlefields of the Western Front.

“The book’s starting point is a quest to trace the military careers of my grandfather and his four brothers, Irish Roman Catholics who served as military surveyors in the Royal Engineers at the end of the nineteenth century. It traces the part they played in the British Empire from its high point in the late nineteenth century to the aftermath of the Great War, when revolution in Ireland anticipated the Empire’s eventual collapse. But it also explores the immigrant heritage of my wider family, to whom Britain offered the one common point of identity,” said Charles.

Charles’ grandfather Patrick Lynch was born in County Clare and joined the Royal Engineers in 1894. Having specialised as a topographical surveyor, he spent the first five years of his service working with the Ordnance Survey in Britain, contributing to OS maps of north-west England and Wales. He received his first foreign posting when he was sent to Gibraltar in 1899, contributing to a survey of the peninsula to help improve its defences. It was the first of a series of postings around the Empire, which included Sierra Leone, Canada, the Federated Malay States (Malaysia today) and Ceylon (Sri Lanka).

Lynch spent much of his time working for a mapping unit called the Colonial Survey Section: part of British Intelligence, it had the specific role of mapping British possessions that were considered to be of strategic importance. The 22 years of his military career in the Royal Engineers ended with the Great War, when he was posted to the British Expeditionary Force in France in October 1915. One of the few surviving family documents from this period is the permit he used to gain entry to church towers and other tall buildings from which to survey the battlefield.

Charles added: “The initial motivation in writing the book was the romance of the British Empire at its most eventful and colourful time – the idea of holding up a mirror to the largest Empire in history through five Irish brothers who mapped it had an obvious appeal. But as I continued with my research, I found myself more and more driven to resolve the tensions in my own identity. I had never really thought about what it meant to be British before, or even felt particularly British. The more I discovered, the more I found myself fascinated by the question of what being British means when your family heritage is a mix of Roman Catholic Irish and Russian Jewish. This book is some attempt at an answer.”

Charles Drazin is a biographer and film historian who lectures on the cinema at the Department of Film Studies, Queen Mary University of London. His previous books include In Search of The Third Man, Korda: Britain's Only Movie Mogul and The Man Who Outshone the Sun King. He is also the editor of two volumes of journals of the novelist John Fowles.