Ken Clarke: Brexit vote swung by voters for whom politics has failed

Politicians have never figured out what to do about those left behind by globalisation and the modernised economy, according to former Chancellor of the Exchequer Ken Clarke. 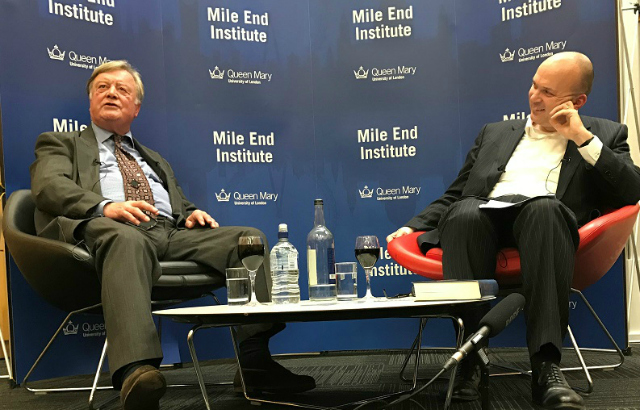 During the audience Q&A he said: “We haven’t quite worked out what to do to help people for whom the process of change has been less favourable - globalisation hasn’t done them any good.”

“The middle-aged and older, white, working class, blue collar factory worker with a skill of which he was proud; the world has not treated him very well. People like me have never really quite worked out how to mitigate it. It’s no good saying we’ve had years of quite remarkable economic growth because there was no economic growth as far as he and his family were concerned.”

Speaking at the Mile End Institute, Queen Mary University of London, Clarke said American-style campaigning has contributed significantly to the corrosion of public trust in politics.

“The political experts on both sides feed each other with the same bogus stuff: you have to repeat these slogans over and over again, you need message discipline, and you get all these talking clock style junior ministers. That puts more and more people off.”

He said that authenticity is key to restoring trust in politics and praised Angela Merkel as the only consequential European leader in recent times. He argued that the politics of spin and the increasing focus on political marketing “requires a successor”.

“It needs someone to emerge who can rise above that: arguing the merits of policies without being boring and actually appeal to the public without arousing cynicism and suspicion,” said Clarke.

Clarke said that politics is now dominated by a voracious and scandal-obsessed media, deepening the contempt in which politicians are held by the public.

He said the Remain side lost the EU referendum partly because of complacency from David Cameron and his political team.

“We all have our weaknesses and one of his [Cameron] is that he gambles a bit. He believes that he’ll be able to handle it, and the idea that Nigel Farage might beat him in a referendum never crossed his mind. I think he thought the odds were very heavily in his favour. He was thinking about the run up to the last election when he just wanted to calm these people down, but of course it didn’t calm them down, they’d never been more excited in their lives,” said Clarke.

He concluded that his greatest political mistake came during the John Major government, when he and Michael Heseltine “allowed the idea of a referendum on Europe to enter back into British politics” with the promise of a referendum on the single currency.

Ken Clarke was in conversation with Professor Philip Cowley from QMUL's School of Politics and International Relations.