It’s 1892, and the streets of London’s East End are not for the faint of heart. The expansion of free trade has decimated the once thriving Spitalfields silk industry, there’s a desperate housing crisis, and work is hard to come by. Meanwhile, East London has a reputation for danger and violence; thanks in part to the terror waged by Jack the Ripper. 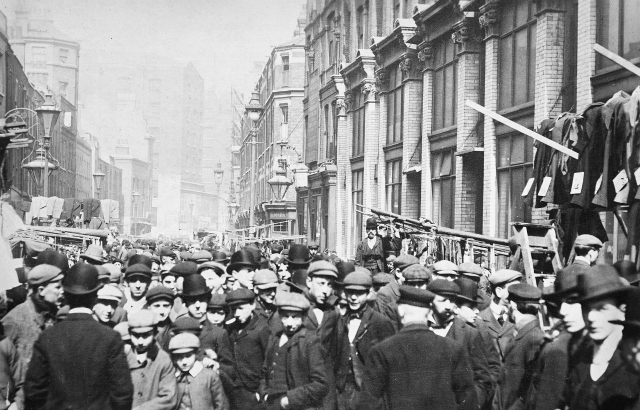 The fortunes and faces of Spitalfields changed many times in the decades before and after 1900, but it was at the turn of the century that the area became known as the ‘Ghetto’. A new immersive walking tour app, produced by QMUL’s Dr Nadia Valman – a historian of literary East London - takes us back to that time, when Jews formed nearly 95 per cent of the population in parts of London’s Spitalfields.

Developed in association with the Jewish Museum London, the free app uses Israel Zangwill’s bestselling 1892 novel ‘Children of the Ghetto’ as a walking guide to the neighbourhood.

According to Dr Valman: “Thousands of Jews arrived in London because of fear of persecution in their home countries. From 1881, following the assassination of Tsar Alexander II, to the outbreak of the Great War, more than two million Jews fled a wave of pogroms and legal restrictions in Russia and Eastern Europe.”

While the majority continued to America, many Jews ended up staying in East London, where housing was cheap and there was a chance of work in the area’s ‘rag trade’.

Dr Valman says: “With Zangwill as our guide we visit the iconic sites of this ‘bustling, swarming ghetto’ for an insider’s view of immigrant life. He’s witty, satirical and astute. He takes us first to the Brune Street Soup Kitchen, where grinding poverty meets pompous Victorian charity. From there we go to the Jews’ Free School on Bell Lane, and then to the once grand town houses of Princelet Street, where we hear the whirr of sewing machines, the murmur of prayers and the bickering of families packed too close for comfort.”

Using photographs, documents, and archive recordings, the app also explores the “festering sewer of lawlessness and vice” that was Petticoat Lane market and the busy streets surrounding the Brick Lane Mosque, originally a French Protestant church and later the largest synagogue in Spitalfields.

Dr Valman added: “The Jews of Victorian East London represent a fascinating chapter in the area’s history. That the area is now a symbol of gentrification makes it even more important that we capture and tell these stories from the East End’s Victorian past. But Zangwill’s tale of immigrants and their English-born children struggling with new opportunities and new dangers is a story for our time too.”

Elizabeth Selby, Curator of Social History at Jewish Museum London said “Our valuable collections have been brought vividly to life with this wonderful walking tour app. Taking a tour of the East End with Israel Zangwill as your guide is a wonderful complement to a visit to the Jewish Museum in Camden.”