East London Genes & Health, the world’s largest community based genetics study, has launched today – aiming to improve health among people of Pakistani and Bangladeshi heritage in East London by analysing the genes and health of 100,000 local people. 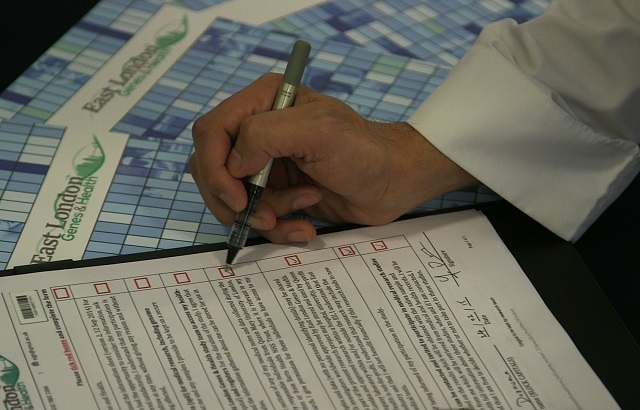 Led by Queen Mary University of London (QMUL) and supported by £4m in funding from the Wellcome Trust and MRC, researchers will study the genetic code and medical records of local South Asian people – with the aim of improving understanding of the links between genes and environmental factors in causing disease. These findings will then contribute to improving healthcare and the long-term prevention and treatment of a number of diseases particularly affecting local communities and the wider population, such as heart disease and diabetes.

East London boroughs, and Pakistani and Bangladeshi communities in particular, have some of the highest rates of poor health in the UK. For example:

• Pakistani men have the highest rate of heart disease in the UK and the risk of dying early from heart disease is twice as high among South Asian groups compared with the general population.
• People from South Asian communities are five times more likely to have type 2 diabetes than the general population.
• Tower Hamlets and Newham have the lowest life expectancy of all London boroughs.

Professor David van Heel, who is co-leading the study at Queen Mary University of London, comments: “East London Genes & Health is entirely focussed on improving local health. Not only do South Asian people have some of the highest rates of poor health in the UK, they are also markedly under-represented in medical research and therefore not likely to benefit from the advances in genetics which are shaping the future of medicine. We aim to change this and we need local support to make it happen.

“By recruiting 100,000 people from the local community, we are giving East London people the opportunity to play a key role in improving the health of future generations, including enhancing our understanding of why certain people get diseases and the development of improved treatment and prevention.”

Following enrolment of 46 local individuals – including healthcare professionals, faith leaders and local council members – QMUL in partnership with Barts Health NHS Trust and local charity Social Action for Health will now begin recruiting participants aged 16 and over from Tower Hamlets, Waltham Forest, Newham and beyond. The study is open to adults with and without health problems who regard themselves as of Bangladeshi, British-Bangladeshi, Pakistani or British-Pakistani origin.

After giving consent, volunteers will donate a saliva sample which will then be examined for genetic information and this will be linked with an individual’s health records. Participation in the study is completely confidential, and no identifiable details (such as name or address) will be passed on or shared.

Professor David van Heel continues: “In addition to the study being totally confidential, one of the best aspects is how easy it is to get involved. To take part you will be able to pop down to your local GP surgery, mosque, community centre – or through our website get a pack sent to your home so you can do it in private. It’s just spitting in a test tube and answering a few questions, but in doing so you’ll be making a valuable contribution to the future of healthcare, for the next generations, both locally and beyond. The local support we’ve received so far has been fantastic and now we need to really spread the word.”

“This is the first time a large-scale genetics study has focussed on two distinct ethnic minority groups, with high levels of health concerns in the community and the potential for significant genetic variation.  Not only do we believe these findings will play a key role in tackling health inequality locally and in the UK, we hope to reveal crucial information about the link between genetics and common diseases which will have significant international impact on healthcare.”

The East London Genes & Health study will work in two stages. Stage one, taking place over the next four years, will focus on recruiting 100,000 participants. Stage two, running until 2034, will focus on utilising the data gathered to support various local, national and international medical research, including recall of certain participants for further studies. The study aims to increase our understanding of the following:

• Drug response: why do people of certain ethnicities suffer severe adverse drug reactions, and is there an underlying genetic cause?
• Diabetes: looking into how people respond to treatments and whether rare types should be treated differently.
• Heart disease: studying genes among people with very high or very low cholesterol, to better understand why heart disease and strokes occur.
• Genetic variation: how do genes vary from person to person in the adult Pakistani and Bangladeshi communities, what is ‘normal’?
• Knock-out genes: when a healthy person has two copies (inherited from both parents) of a gene that functions differently to the norm, and how this information can be used to influence medicine and the development of new treatments.

East London Genes & Health is different to other genetic sequencing studies because of its focus on two distinct UK ethnic minority groups – with a unique range of genetic variation and high levels of health deprivation – and access to local electronic NHS health records.

The study of genetic variation is crucial in helping us better understand the ‘normal’ variation in Bangladeshi and Pakistani genes, which will then help the diagnosis of inherited rare diseases.

The team will study knock-out genes in order to better understand how they impact health in a positive way (such as lowering cholesterol) with the hope of eventually developing drugs or treatments which block ‘bad’ genes and enhance ‘good’ ones. Knock-out genes are rare in the general population but the chances of carrying one is increased when a person’s parents are related, as is more common among Pakistani and Bangladeshi communities.

Professor Richard Trembath concludes: “Right now we’re only scratching the surface of genetic data and its power. Large-scale studies like East London Genes & Health have the potential to reveal crucial information on health and disease. We look forward to contributing to the UK’s growing expertise in this vital area of medicine.”

For details on how to participate in the East London Genes & Health study or for more information, visit www.genesandhealth.org.