A combination of three proteins found at high levels in urine can accurately detect early-stage pancreatic cancer, researchers from Queen Mary University of London have found. The discovery could lead to a non-invasive, inexpensive test to screen people at high risk of developing the disease. 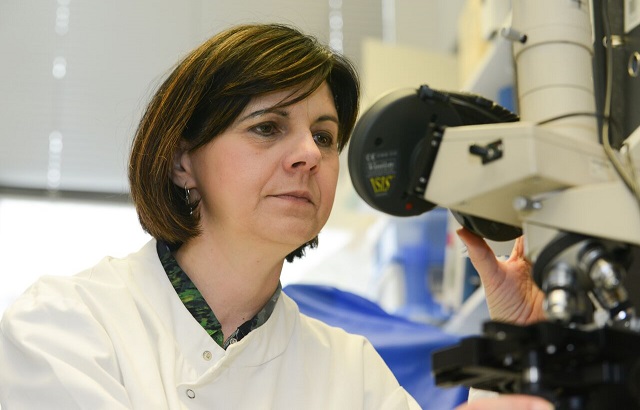 The new study, published today in the journal Clinical Cancer Research and funded by by the Pancreatic Cancer Research Fund, has shown that the three-protein ‘signature’ can both identify the most common form of pancreatic cancer when still in its early stages – and distinguish between this cancer and the inflammatory condition chronic pancreatitis, which can be hard to tell apart.

Around 1500 proteins were found in the urine samples, with approximately half being common to both male and female volunteers. Of these, three proteins – LYVE1, REG1A and TFF1 – were selected for closer examination, based on biological information and performance in statistical analysis.

Patients with pancreatic cancer were found to have increased levels of each of the three proteins when compared to urine samples from healthy patients, while patients suffering from chronic pancreatitis had significantly lower levels than cancer patients. When combined, the three proteins formed a robust panel that can detect patients with stages I-II pancreatic cancer with over 90 per cent accuracy.

With few specific symptoms even at a later stage of the disease, more than 80 per cent of people with pancreatic cancer are diagnosed when the cancer has already spread. This means they are not eligible for surgery to remove the tumour - currently the only potentially curative treatment.

The five-year survival rate for pancreatic cancer is the lowest of any common cancer, standing at 3 per cent. This figure has barely improved in 40 years.

Lead researcher, Dr Tatjana Crnogorac-Jurcevic of Queen Mary University of London, said: “We’ve always been keen to develop a diagnostic test in urine as it has several advantages over using blood. It’s an inert and far less complex fluid than blood and can be repeatedly and non-invasively tested. It took a while to secure proof of principle funding in 2008 to look at biomarkers in urine, but it’s been worth the wait for these results.

“This is a biomarker panel with good specificity and sensitivity and we’re hopeful that a simple, inexpensive test can be developed and be in clinical use within the next few years.”

The team is hoping to conduct further tests on urine samples from people in high risk groups, to further validate the study findings.  Dr Crnogorac-Jurcevic is also keen to access samples of urine collected from volunteers over a period of 5-10 years. By examining samples from donors who went on to develop pancreatic cancer, this  ‘longitudinal’ information will allow the researchers  to see if the 3-biomarker signature is present  during the latency period – the time between the genetic changes that will cause the cancer to develop and the clinical presentation.

“For a cancer with no early stage symptoms, it’s a huge challenge to diagnose pancreatic cancer sooner, but if we can, then we can make a big difference to survival rates,” says co-author and Director of Barts Cancer Institute at Queen Mary University of London, Professor Nick Lemoine.  “With pancreatic cancer, patients are usually diagnosed when the cancer is already at a terminal stage, but if diagnosed at stage 2, the survival rate is 20 per cent, and at stage 1, the survival rate for patients with very small tumours can increase up to 60 per cent.”

CEO of the Pancreatic Cancer Research Fund, Maggie Blanks, said: “This is an exciting finding and we hope to see this research taken forward into a much needed early diagnostic test.  Early diagnosis is an important part of our overall efforts against this aggressive cancer, alongside developing new treatments to tackle the disease once diagnosis is made.  It underlines the importance of increased research efforts to help improve survival rates.

“Many of the urine samples from healthy individuals tested by Tanja’s team were donated from the charity’s own supporter community, and I know they will be extremely proud that they have directly contributed to research progress in ways that go beyond traditional financial support.”