A post-doctoral researcher from Queen Mary University of London has won a prestigious €1,000 prize for her work on psychiatric diseases. 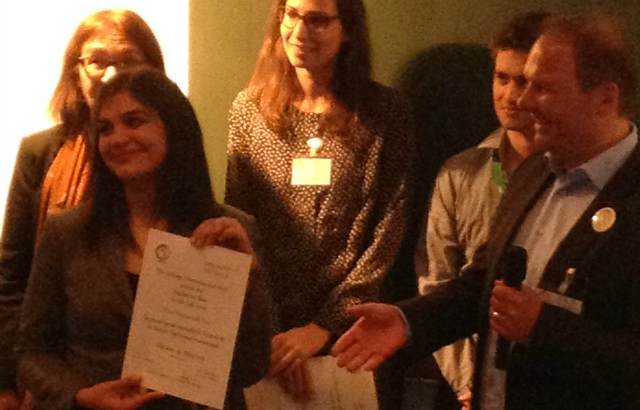 Priyamvada Dua was awarded the Hephaistos Prize for advances in basic methods supporting the research in psychoneuroimmunology by the foundation ‘Immunität und Seele’ and GEBIN (German Endocrine Brain Immune Network), a network that combines activities in different German scientific societies with a special interest in Behaviour-Neuro-Endocrine-Immune interactions and interdisciplinary research at the 2015 GEBIN meeting in Munich, Germany.

Priyamvada Dua said: “I am honoured to be given this prize and hope that our future research will help disentangle the complex causes of psychiatric diseases such as Tourette’s syndrome, autism, depression and schizophrenia. We call for a change in the way of thinking and believe that these disorders should not only be measured as a psychological/psychiatric construct but also as a state of chronic inflammation, which will help de-stigmatise psychiatric disease.”

Dr Ute-Christiane Meier, Priya’s supervisor, added: “Priya has already made outstanding contributions to the field of psychoneuroimmunology despite her young age and will drive the field even further with her talent in the hope of identifying novel and innovative treatment strategies. Priya collaborates with several centres in the UK/Europe and in her home country India (e.g. with the UK Autism charity Treat Autism, the Rainbow Foundation in India and the neurology/psychiatry departments in Chandigarh, India) to pursue her research interest in psychoneuroimmunology.”

Priyamvada Dua completed her PhD thesis on Tourette’s syndrome at QMUL's Blizard Institute and was awarded the Mary Robertson Award for Research Contribution by the European Society for the study of Tourette’s syndrome (ESSTS) in Athens in 2013. She is currently funded by EMTICS, which is a project funded by the EU programme FP7 and combines 27 partners from 11 different countries. EMTICS aims to identify the genetic and environmental susceptibility factors of tic disorders and will greatly contribute to a better understanding of the underlying mechanisms.