Leading QMUL cancer researcher Professor Jack Cuzick has been given a prestigious award for his contributions to clinical research. 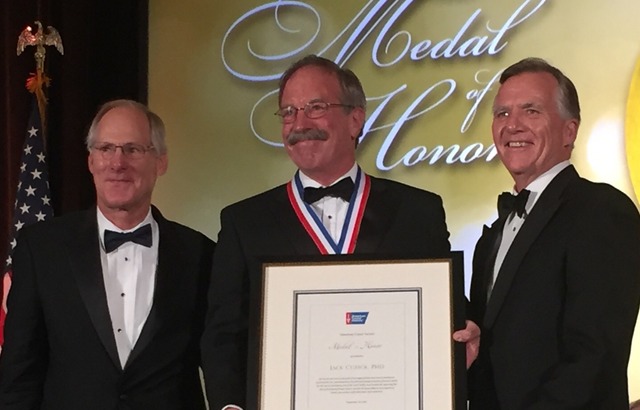 Professor Cuzick, Director of QMUL’s Wolfson Institute of Preventive Medicine and Head of the Centre for Cancer Prevention, was awarded the American Cancer Society’s highest honour at their annual celebration dinner.

The American Cancer Society said that it was giving the award to Professor Cuzick to recognise his three decades of leadership in cancer prevention and screening.

Professor Cuzick is internationally known for advancing the field of breast cancer chemoprevention through his early and path breaking work with tamoxifen, and most recently, the research that contributed to the introduction of aromatase inhibitors, both for the treatment of breast cancer, and as an agent for chemoprevention. He is the co-developer of a widely used breast cancer risk estimation model, and has been a leader in the design and analysis of clinical trials of cancer prevention, early detection, and treatment.

Speaking about his award, Professor Cuzick, said: “As our work is mostly collaborative, this is really recognition for the whole group of our collaborators, but I am delighted to receive this award on their behalf. This also is an important achievement in raising the profile of preventive medicine, which is where my efforts are focussed.”

Dr Fiona Reddington, Cancer Research UK’s head of population research, said: “We’d like to share our congratulations with Professor Jack Cuzick on his latest achievement. Over the years his research has identified numerous potential ways to prevent cancer and his work has undoubtedly had a huge impact in the field.”