Scientists have proved that listening to music before, during and after surgery reduces people’s pain, anxiety and need for painkillers – according to the most comprehensive review of available evidence so far, published today in The Lancet. 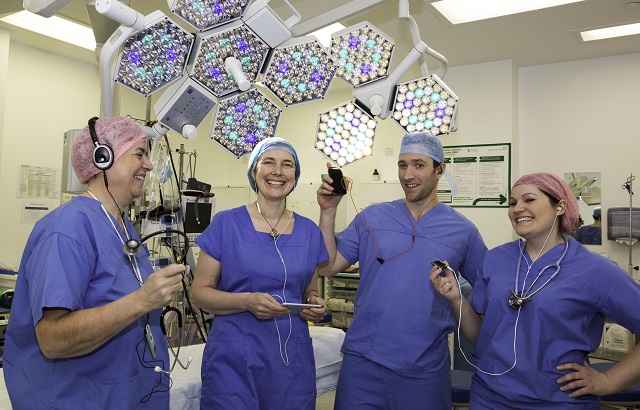 Led by Queen Mary University of London, the study team analysed the results of 73 randomised controlled trials looking at the impact of music on postoperative recovery, compared with standard care or other non-medical interventions such as massage.

The systematic review involved nearly 7,000 patients in total and the findings confirmed, for the first time, the link between music in the operating theatre and a significant reduction in postoperative pain, postoperative anxiety and the need for postoperative pain relief medication.

Researchers analysed data on adult patients undergoing a variety of surgical procedures, with or without anaesthesia, to any part of the body. The only exclusions were surgery on the central nervous system, head and neck (because of potential hearing impairment).

Choice of music, timing and duration varied in all the studies analysed, and evidence showed these factors made little difference to the outcome. Music was effective even when patients were under general anaesthetic.

Dr Catherine Meads, who led the study at Queen Mary University of London but is now based at Brunel University London, comments: “Currently music is not used routinely during surgery to help patients in their postoperative recovery. The lack of uptake is often down to the scepticism of professionals as to whether it genuinely works, and of course issues of budget and the integration into daily practice. We hope this study will now shift misperceptions and highlight the positive impact music can have.”

Dr Martin Hirsch, Co-Study Author at Queen Mary University of London and Barts Health NHS Trust, comments: “We have known since the time of Florence Nightingale that listening to music has a positive impact on patients during surgery, by making them feel calmer and reducing pain. However, it’s taken pulling together all the small studies on this subject into one robust meta-analysis to really prove it works.”

Most people undergo a surgical procedure at some point in their lives. Around 4.6 million hospital admissions lead to surgical care in England, and over 51 million operations are performed annually in the USA. Feelings of pain and anxiety before and after, as well as a need for ongoing pain relief are very common. Music is one of the easiest, safest, cheapest and least invasive interventions that healthcare workers can deliver, and at great benefit to patients.

The researchers now hope to get advice on preparing for surgery into hospitals, so patients know to take their smart phones or iPods etc with them and listen to it before, during and after the procedure, as directed by hospital staff.

Jenny Hole, Co-Author and Medical Student at Queen Mary University of London, Barts and The London School of Medicine and Dentistry, comments: “There is now sufficient evidence to demonstrate music should be available to all patients undergoing surgery. Patients should be able to choose the type of music, and timing and delivery may be adapted to different settings depending on the medical requirements and teams involved.”

The team are following up this research later this year with a pilot scheme of introducing music into operative settings at The Royal London Hospital, run by Barts Health NHS Trust. The two areas piloted will be women having Caesarean sections and women having hysteroscopy. Patients will submit their music playlist on a device of their choice, and this will be connected to a pillow with inbuilt loudspeakers. The researchers will then analyse the effectiveness of rolling this out in practice, and will deepen their understanding of why some evidence-based innovations might be difficult to put into practice.