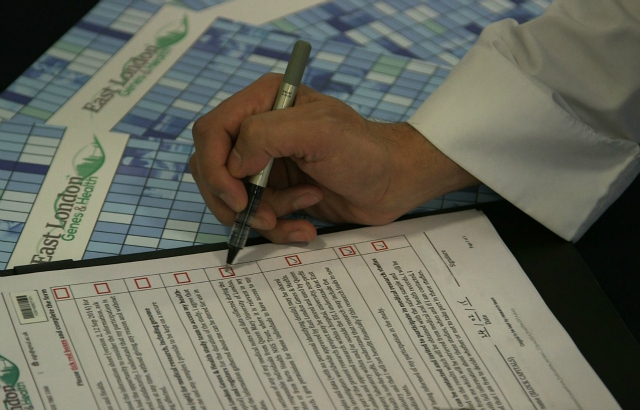 Launched in March 2015 and led by Queen Mary University of London (QMUL), East London Genes & Health aims to improve health among people of Pakistani and Bangladeshi heritage in East London by analysing the genes and health of 100,000 local people.

The study’s 4,000th participant is Mr Zoinul Abidin, who presents the Ramadan Special programme on BetarBangla 1503 AM – a community radio station which serves the Bangladeshi and wider communities in East London.

Commenting on taking part in the East London Genes & Health study, Mr Abidin said: “I am taking part to make a difference. I want to lead by example to encourage people from the local community to come forward and take part in this significant piece of research. I lost my father to diabetes and my mother also has it. In future years this research will play its part in saving lives, and I want to play my very small part in helping make a huge difference.“

Professor David van Heel, leading the study at Queen Mary University of London, added: “Only five months into the East London Genes & Health study and we’re delighted to have reached this milestone of welcoming our 4,000th participant. The local community has really got on board and shown their support for this important project and we look forward to building on this early success in the coming years.”

About East London Genes & Health
The East London Genes & Health research project will study the genetic code and medical records of local South Asian people – with the aim of improving understanding of the links between genes and environmental factors in causing disease. These findings will then contribute to improving healthcare and the long-term prevention and treatment of a number of diseases particularly affecting local communities and the wider population, such as heart disease and diabetes.

Why is this study needed?
East London boroughs, and Pakistani and Bangladeshi communities in particular, have some of the highest rates of poor health in the UK. For example:
• Pakistani men have the highest rate of heart disease in the UK and the risk of dying early from heart disease is twice as high among South Asian groups compared with the general population.
• People from South Asian communities are five times more likely to have type 2 diabetes than the general population.
• Tower Hamlets and Newham have the lowest life expectancy of all London boroughs.

Who can take part and what does it involve?
East London Genes & Health is open to adults with and without health problems who regard themselves as of Bangladeshi, British-Bangladeshi, Pakistani or British-Pakistani origin. After giving consent, volunteers will donate a saliva sample which will then be examined for genetic information and this will be linked with an individual’s health records. Participation in the study is completely confidential, and no identifiable details (such as name or address) will be passed on or shared.

What happens next?
The East London Genes & Health study will work in two stages. Stage one, taking place over the next four years, will focus on recruiting 100,000 participants. Stage two, running until 2034, will focus on utilising the data gathered to support various local, national and international medical research, including recall of certain participants for further studies.

For details on how to participate in the East London Genes & Health study or for more information, visit www.genesandhealth.org and follow us on Twitter @EastLondonGenes

The study is originally funded by the Wellcome Trust and MRC, with support from Barts Charity.