Phytoplankton like it hot: Warming boosts biodiversity and photosynthesis in phytoplankton

Warmer temperatures increase biodiversity and photosynthesis in phytoplankton, researchers at the Queen Mary University of London (QMUL) and University of Exeter have found. Globally, phytoplankton - microscopic water-borne plants - absorb as much carbon dioxide as tropical rainforests and so understanding the way they respond to a warming climate is crucial. 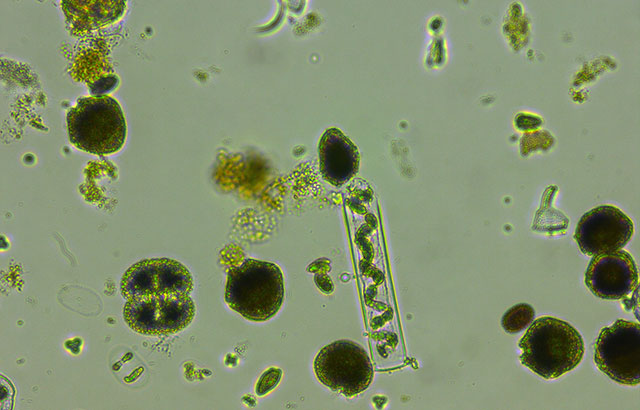 The groundbreaking study, published in the journal PLOS Biology, was carried out over five years using artificially warmed ponds that simulated the increases in temperature expected by the end of the century.

The researchers found that phytoplankton in ponds that had been warmed by four degrees, had 70% more species and higher rates of photosynthesis, and as a result, have the potential to remove more carbon dioxide from the atmosphere.

Phytoplankton were counted, measured and identified under a microscope, and the production or consumption of oxygen was measured to determine rates of photosynthesis and respiration.

The study found that phytoplankton communities in the warmed ponds were more species rich, had greater evenness in species abundance, greater biomass and were dominated by larger species.

In contrast to previous work conducted in small scale, short-term laboratory experiments, these findings demonstrate that future global warming could actually lead to increases in biodiversity and photosynthesis in some locations. These results cannot be extrapolated to the global scale as declines might occur in other places where different ecological mechanisms prevail.

The authors attribute their findings to the fact that the experiments were conducted in open outdoor ecosystems where local extinctions of species can be replaced by new immigrants from surrounding locations.

Professor Mark Trimmer from QMUL’s School of Biological and Chemical Sciences said: “Our warming facility at QMUL has been running for 10 years now and it is quite remarkable what such a simple experiment has enabled us to uncover about how  climate warming alters the cycling and balance of the key bio-elements that sustain life on Earth.”

Dr Gabriel Yvon-Durocher from the Environment and Sustainability Institute at the University of Exeter said: “The increases we’ve seen in phytoplankton biodiversity appear be driven primarily by the effects of warming on zooplankton – the microscopic animals that eat phytoplankton.

“Higher grazing rates by the zooplankton, which prefer small abundant phytoplankton species, prevent the ecosystem being dominated by just a few of these highly competitive species, allowing species which are inferior competitors for resources to coexist.

“What our study clearly shows is that future global warming is likely to have a major impact on the composition, biodiversity and functioning of plankton, which play a pivotal role in aquatic ecosystems.”

The study was funded by the Natural Environment Research Council (NERC).