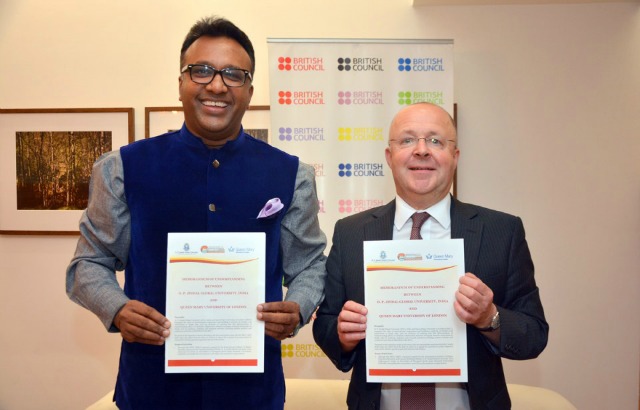 The signing took place at the British Council offices in New Delhi on 9 December, at the start of a three-day British ministerial visit led by the Secretary of State for Business, Innovation and Skills Sajid Javid MP and the Minister for Universities and Science Jo Johnson MP to promote cooperation on education, skills and research.

The AESARU is perceived as a network of universities that are relatively newly-established, have or aspire to a significant research ambition in their institutional mission, aim to contribute to economic and social progress, actively promote integrity, excellence, and equality of opportunity and are genuinely not-for-profit in their operating model. It intends to be recognised as a participatory, progressive, and values-based network organisation, transcending national boundaries and encouraging substantial and continued self-development of its members and of higher education within South Asia more generally.

Under the MoU, QMUL will facilitate the building of a network for the AESARU and will cultivate members not only from its own extensive network in the region, but also from outside. The two institutions will jointly organise meetings and conferences for the network activities. Other AESARU activities will include, among other things, student and faculty exchanges, research and teaching collaborations and summer programmes.

Professor Sadler said: “Building on our existing partnership with O.P. Jindal Global University (JGU), Queen Mary University of London is pleased to be working in close collaboration with the International Institute for Higher Education Research and Capacity Building at JGU on this exciting new project.  It signals our long term commitment to working in India, and South Asia at large, and we look forward to helping facilitate greater information exchange, teaching and research collaboration between member institutions of this new network across the region.”

He added: “It's a particularly opportune moment for new universities across South Asia to be learning from each other and developing mechanisms for collaboration and mutual support, and QMUL is uniquely placed in the UK to support this process".

Professor Kumar said: “We have had the opportunity to partner with leading institutions across the globe, but this partnership with Queen Mary University of London is truly special, not only will it help set up progressive global exchange and study opportunities for students and faculty of both institutions, but also help create a framework of economic and social progress that actively promotes excellence, and equality of opportunity for the youth in the South Asian region.”

He added: “there is a dire need for institutions in the South Asian region to participate and build a stronger base for policy making in the higher education sector in their respective countries”. Professor Kumar also called for institutions with similar goals to partner and contribute to this vision.

Director of the British Council India Rob Lynes said: “The British Council supports partnerships between UK and Indian Universities, and with 2016 being the UK-India year of education, research and innovation, we trust this new relationship between Queen Mary University and OP Jindal Global University will be both a productive and mutually beneficial partnership.”