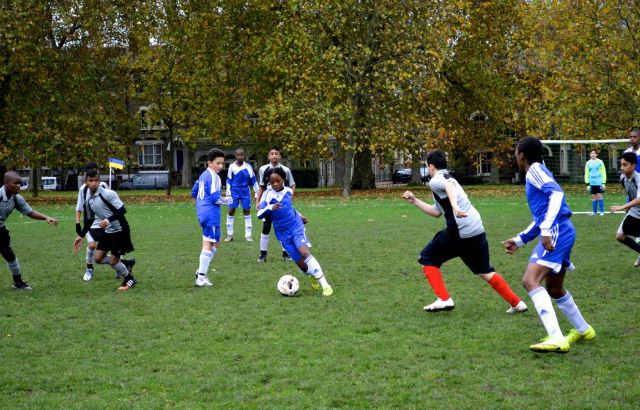 The Community Cup, held on November 5 at Victoria Park, offered more than 45 Year 8 school boys the opportunity to speak to the footballers from Queen Mary University of London (QMUL).

They were able to tell the kids about their routes to university, explain some of the troubles they may have faced along the way, and ultimately promote the benefits of pursuing higher education.

Harry Madgwick, President of QMFC, said: “The Community Cup was a great way to engage with local school kids in Tower Hamlets and have a bit of fun playing football too. QMUL has strong links to the community in the borough and it was great to chat to the younger generation to explain more about the benefits of university and university life.

“The day was a real success in the end and hopefully we’ll see some of these boys at QMUL in the future.”

The cup was run as a round robin tournament with each team playing each other once and when a team wasn’t playing they took part in interactive games on university life, led by QMFC members. Eventually the team from Bishop Challoner Catholic Collegiate School won the Cup.

The event was being run in conjunction with Queen Mary Student Union’s Community Sport and Widening Participation schemes, both of which work with children throughout East London, improving the university’s outreach programme.

The project was made possible by funding from QMUL’s Annual Fund as part of its community allocation.