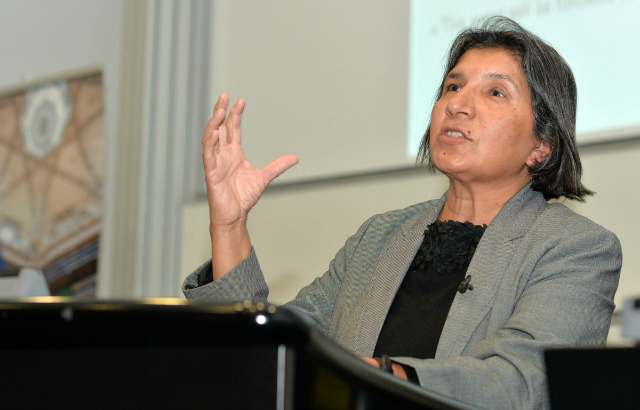 Professor Manjoo was speaking at the annual lecture (7 May) of the Criminal Justice Centre, based at the School of Law, Queen Mary University of London.

In a wide-ranging speech, Professor Manjoo spoke of significant progress at UN level but warned that in many societies “violence against women and girls continues to be perceived both as socially acceptable and legitimate”.

“It occurs in public and private spaces, whether in the home, the community, the workplace, in State institutions or in the transnational sphere. Unfortunately, very often violence begins in the family, in the form of domestic violence broadly, particularly intimate partner violence, child abuse, or through harmful and degrading practices that are violent to or subordinate women, and that are justified on the basis of religious, customary or other societal laws and practice.

“…It is extremely underreported. Victims hesitate to report out of fear of retaliation, family or community pressure not to reveal the violence, poor awareness of rights, lack of support services, economic dependency, or perceptions that the justice system will not respond adequately.”

Professor Manjoo’s remarks were set in the context of the 20th anniversary of the establishment of the UN Special Rapporteur on violence against women. While acknowledging the many great strides that have defined the period, “reflected in the endorsement of principles by States, through declarations and resolutions”, she highlighted the absence of specific, binding legal commitments.

“The lack of a legally binding instrument to hold both States and non-state actors accountable, constitutes one of the main challenges that my mandate has identified over the last five years…The limitations of large and varied monitoring mandates, coupled with time constraints when examining State reports, results in insufficient interrogation of the information relating to violence against women, its causes and consequences; and more importantly insufficient assessment of responses.”

Professor Manjoo underlined that while many States have made good progress, protection for women and girls remains highly inconsistent, and in some cases, wholly inadequate. She said that challenges as regards State responsibility include the lack of acceptance of violence against women as a human rights issue; sanctions that do not reflect the seriousness of the crime, chronic under-reporting, and very low conviction rates for perpetrators.

“The State is the ultimate duty bearer and it has the responsibility to act with due diligence to protect women and girls, and to prevent acts of violence. It is my view that States’ are not being held accountable for failing in their responsibility to promote the rights of women and girls, including through the provision of effective redress measures for all human rights violations,” said Professor Manjoo.

In summary, she called for a strengthened and binding UN role, in order to achieve significant and lasting progress for women and girls, globally.

“The adoption of a United Nations binding international instrument on violence against women and girls, with its own universal monitoring body, would ensure that States are held accountable to standards that are legally binding; it would provide a clear normative framework for the protection of women and girls globally; and it would have a specific monitoring body to substantively provide in-depth analysis of both general and country level developments.”

The Criminal Justice Centre (CJC), based at QMUL’s School of Law, provides a forum for research and learning in all aspects of criminal justice. Its members are drawn from both the legal profession and academia. It provides advice and training to the legal profession, governments and judiciaries, authors key publications on criminal justice, engages with the media, undertakes collaborative research, supervises post-graduate research and regularly hosts seminars, lectures, workshops and conferences. In 2015 the centre launched a new LLM in Criminal Justice programme.