In 1877, the few square miles around where Queen Mary University of London stands today was one of the most densely populated places on earth. In a then squalid corner of London, more than a million people – many of them desperately poor – faced hunger, unemployment, and disease. 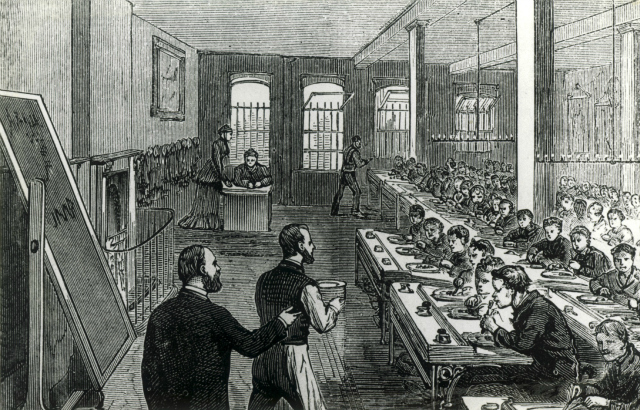 For destitute children and their families, the Ragged School offered hope of a better future through the promise of a free education, food, warmth, clothing and training.

The exhibition was opened on 20 August – as part of the Inside Out Festival - by the 12th Earl of Shaftesbury, a direct descendant of the first President of the Ragged School Union, formed in 1844. The 7th Earl, one of the most active social reformers of the 19th century, was a strong advocate of ragged schools.

Professor Alastair Owens was among a group of QMUL researchers who worked with the Ragged School Museum to tell the stories of the East End’s Victorian children.

He said: “From birth, the lives of these children were defined by struggle. Nothing was easy and most of the things modern children take for granted – food, health, family, a bed – were precarious or not there at all,” said Professor Owens.

He added: “The story of the exhibition is about hardship, hope, and philanthropy. East London was the home of tremendous poverty but it was also the site of one of the largest schools in the Ragged School movement, which was opened in 1877 by the renowned philanthropist Dr Thomas Barnardo. The Ragged School Museum is in a unique position to tell the history of the struggle for free universal education and it has been wonderful to work with them on this project.”

The new gallery display includes images, objects, and materials curated from collections at the Ragged School Museum, London Metropolitan archives, and the archives of the children’s charity Barnardo’s.

Erica Davies, Director of the Ragged School Museum, said: “Ragged Children, Mended Lives uses photographs, stories, and original research to explore the area’s history of poverty, poor health, philanthropy and emigration. The exhibition is designed to appeal to all ages and we’ve also developed educational resources for pupils aged between 7 – 14.”