With One Voice, an international arts programme designed to give homeless people in host cities a voice during the Olympics will be launched in São Paulo, Brazil on Saturday 12 December. 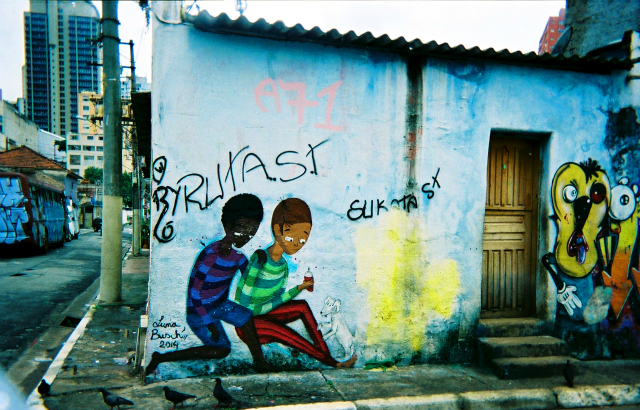 Produced by QMUL’s People’s Palace Projects and Streetwise Opera, the launch showcases the work of more than 90 homeless people who – at the beginning of November - used disposable cameras to tell the stories of their city and their lives.

From more than 4,500 images, the organisers selected the best 20, after which 13 images were chosen by a public vote to make up My São Paulo Calendar. The proceeds of the calendar, produced in partnership with Secretary of Human Rights and Citzenship of São Paulo, will go to Arts & Homeless projects in the city

“When they gave us the cameras, we forgot about the world”, said Matheus Leandro Barbosa, who has been living on the streets for five years.

Matheus had two photos chosen to be a part of My São Paulo calendar. He said: “I wanted to portray people I see every day in the streets, because I think this is what the project is all about: telling people’s stories”.

Another photographer, Diogo Virolli, took a photo of a house with no windows, because it reminded him of his childhood home, in Northeast Brazil. “It reminded me of when I was a child. I was very happy then,” he said.

The concept behind the project comes from English organisation Café Art, which has carried out a similar initiative in London for the last three years.

The My São Paulo Calendar will be launched during the Human Rights Festival of São Paulo. It’s a limited edition, and it will be sold for £9.99 in the UK. To purchase a copy, visit cafeart.org.uk.

With One Voice is supported by The British Council Brazil and Calouste Gulbenkian Foundation UK Branch.