Dr Shahidha Bari, Lecturer in Romanticism at Queen Mary University of London, has won the Observer / Anthony Burgess Prize for Arts Journalism. Now in its third year, the £2000 prize is for “previously unpublished, imaginative, original, and thought-provoking” works. 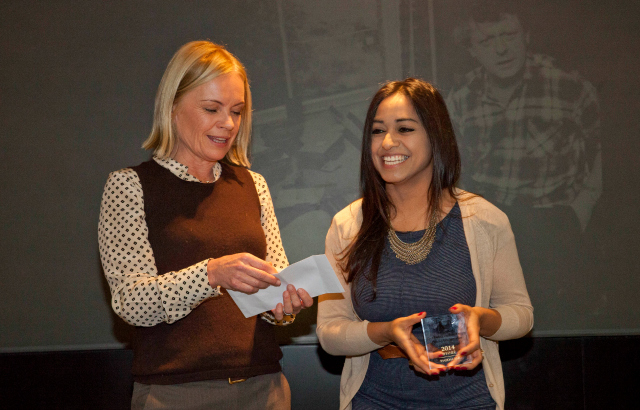 Dr Bari, whose entry was shortlisted among a group of eight finalists, won the prize for a piece entitled: ‘The National Theatre’s Medea’.

According to the Anthony Burgess Foundation:

“When choosing the winner, the judges will be looking for imaginative, original, and thought-provoking arts journalism that would be suitable for publication in the Observer. They will be looking for emerging talent, innovative approaches and writing from outside the mainstream, and they are especially keen to read entries from those who have not previously had work published by major media organisations."

They are also, as William Boyd commented while judging the 2012 entries, looking for "some Burgessian fizz and crackle and a bit of well-displayed erudition.”

Dr Bari, whose article was published in Observer (8 March), was announced as the winner at a ceremony on 1 March. She described the win as “a really lovely and very welcome surprise. Thinking and writing about the piece was a real joy”.

The International Anthony Burgess Foundation encourages and supports public and scholarly interest in all aspects of the life and work of Anthony Burgess, best known for his famous work, A Clockwork Orange. Based in Manchester, England, the Foundation has an extensive library, archive and study centre containing Burgess’s books, music and papers, as well a performance venue for new work by writers, artists and musicians.

Shahidha Bari is a writer, academic and critic, based in London. She is Lecturer in Romanticism at QMUL's School of English and Drama.

In 2011, Bari was selected as one of ten BBC Radio 3 New Generation Thinkers, a project launched in conjunction with the Arts and Humanities Research Council (AHRC) to communicate academic research to a wider audience. Her work has been featured extensively in the national and international media.