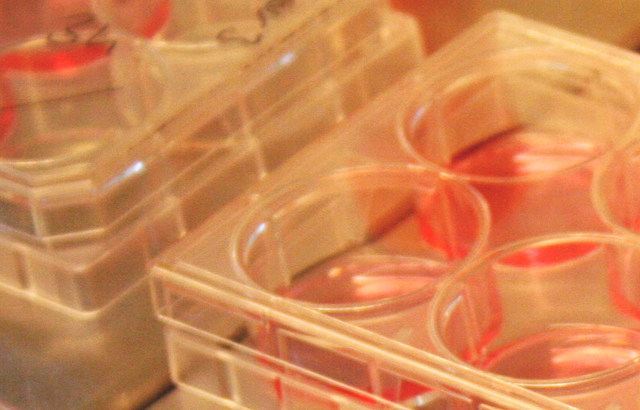 For the first time, researchers from Queen Mary University of London (QMUL) have revealed the molecule αvβ6 (alpha v beta 6) plays a fundamental role in helping breast cancer cells to grow and spread. The study, published online in the Journal of the National Cancer Institute, therefore pinpoints this molecule as a viable new target for treating one of the most aggressive types of breast cancer.

Around one in five breast cancers – 10,000 cases per year - are HER2-positive, a particularly aggressive type of breast cancer where increased levels of the HER2 protein gives cancer cells the ability to grow and spread.

Currently, the first line of treatment for patients with HER2-positive breast cancer is the targeted therapy Herceptin, also known as trastuzumab. Herceptin blocks the growth signals sent from HER2 to stop the cancer cells from growing and spreading. However, it has been estimated that up to 70 per cent of patients either do not respond to Herceptin, or develop a resistance to the therapy - leaving up to 7,000 women in the UK every year with limited treatment options .

The results of the study, led by QMUL’s Barts Cancer Institute and funded by Breast Cancer Campaign, not only show how high levels of αvβ6 in a breast tumour identify patients with poor survival - and who have a higher risk of developing secondary tumours - but also reveal αvβ6 as a viable target for antibody-directed therapy.

Dr Kate Moore, lead researcher at Queen Mary University of London, explains: “The αvβ6-targeting antibody called 264RAD had been shown to reduce tumour size and spread in our previous studies with Astra Zeneca , but hadn’t been tested in combination with other drugs. We found that simultaneously targeting αvβ6 and HER2 in mice with tumours grown from human breast cancer cells, greatly improved the effectiveness of Herceptin (trastuzumab) – even eliminating tumours that did not respond to Herceptin alone, which could represent a huge breakthrough in tackling these highly aggressive cancers.”

The molecule alpha-v beta-6 (αvβ6), which belongs to a family of proteins called integrins, is usually not detectable on healthy cells. While research has shown that αvβ6 is found in cancer cells where it promotes cancer’s migration, invasion and survival, until now its relevance and role in breast cancer growth and spread was unknown.

The researchers analysed breast cancer samples from over 2000 patients  and found that while normal breast tissue contained no trace of αvβ6, high levels of αvβ6 were found in 40 per cent of tumours from HER2-positive patients, and this was associated with poor survival. Even when results were adjusted for other tumour features, HER2-positive patients with high levels of αvβ6 in their tumour were twice as likely to die within five years of diagnosis as those with low levels.

To investigate the link between HER2 and αvβ6, the scientists studied HER2-positive breast cancer cell lines, including one which was Herceptin-resistant. Using the experimental antibody 264RAD  to block αvβ6, the team was able to confirm the ability of the cancer cells to invade was dependant on the presence of αvβ6.

In further experiments, treating mice with Herceptin-resistant tumours for six-weeks with a combination of 264RAD and Herceptin completely eradicated tumours in all treated mice, whereas tumours in mice treated with only 264RAD or Herceptin continued to grow.

In mice with tumours that were sensitive to Herceptin, just two weeks of combination treatment caused a 94.8 per cent decrease in the final tumour size, compared with the untreated control group. In comparison, the reduction caused with Herceptin alone was only 77.8 per cent, suggesting that targeting αvβ6 could improve the effectiveness of Herceptin even against tumours which appear to be responding to the drug.

Dr John Marshall, who led the research at Queen Mary University of London, added: “The results of this pre-clinical study suggest that targeting the αvβ6 molecule may enhance the effectiveness of Herceptin – and that a combination treatment could be effective for patients where Herceptin alone has not worked. The antibody 264RAD which we used in this research in collaboration with AstraZeneca/Medimmune, has now undergone sufficient pre-clinical animal testing and we are looking at options to progress to a clinical trial involving breast cancer patients.”

“This process is likely to take 3-5 years, and depending on the results, further clinical trials would be required to provide the evidence needed to make this drug widely available to patients. Once the drug becomes available, high αvβ6 levels could be tested for in routine biopsies to identify which women are at a high risk of metastasis, ensuring these women can receive personalised treatment, improving their chances of survival.”

Baroness Delyth Morgan, Chief Executive at Breast Cancer Campaign, says: “Despite great advances in the past 20 years, five-year breast cancer survival in the UK is worse than the European average. Our ‘Spread the word’ campaign’ highlights that breast cancer is not a done deal and that much more must be done to improve survival rates.

“There is a desperate need for drugs which work in new ways to give the thousands of women diagnosed with HER2-positive breast cancer the best possible chances of surviving the disease. This study could pave the way for new treatments and bring us closer to our goal to prevent half the deaths from breast cancer by 2025 though improved personalised treatments.”

With further support from a Breast Cancer Campaign grant, Dr Marshall and Dr Moore are now investigating the most effective time to treat tumours with 264RAD – this could show whether targeting αvβ6 in combination with Herceptin could stop the spread of HER2-positive breast cancer, and have the potential to prevent a significant number of the 12,000 deaths from breast cancer in the UK each year.

In December 2013, Breast Cancer Campaign researchers also based at Queen Mary University of London’s Barts Cancer Institute revealed that αvβ6 could tell doctors which cases of Ductal Carcinoma in Situ (DCIS) - a condition where non-invasive cancerous cells are contained within the milk ducts of the breast - are most likely to develop into early ‘invasive’ breast cancer .