The Royal College of Obstetricians and Gynaecologists has awarded the Edgar Gentilli Prize to Dr Neha Pathak, a QMUL academic clinical fellow, for her research on a urine test for cervical cancer. 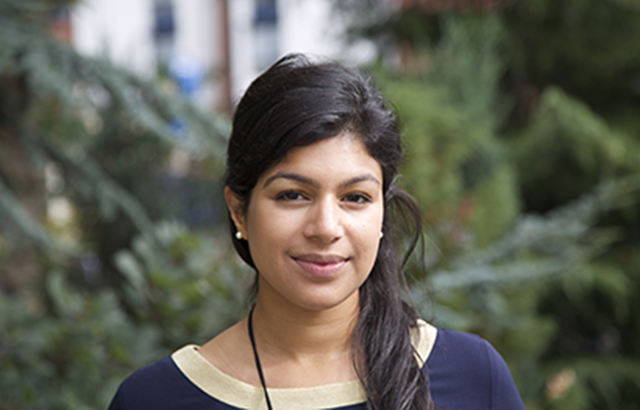 The prize of £750 plus £250 of book tokens is awarded for the best piece of original work on the cause, nature, recognition and treatment of any form of cancer of the female genital tract.

Neha’s research grabbed headlines around the world when it was published in the British Medical Journal (BMJ) in September.* The paper showed that a simple urine test could offer women a less invasive, but accurate and efficient alternative to the smear test sample to detect the human papilloma virus (HPV), which is one of the main causes of cervical cancer.

“Even in a developed country like the UK, women’s take-up of smear tests has gone down to under 80%, partly because it’s an invasive and uncomfortable process, and, for working women, it can be difficult to find the time to fit it in their busy lives. A simple urine test would be an easy and potentially cheap alternative. This is a particularly important consideration for women in developing countries,” said Neha.

Neha heard that she had won the prize on October 6. She said: “It’s a rather unexpected honour and, of course, it’s great to be recognised by senior colleagues and mentors within my specialty. It definitely gives me an energy boost to keep working away at these research questions!”

Neha is carrying out the research for her fellowship under the supervision of Professor Kkalid Khan at QMUL’s Blizard Institute. “I love working in the women’s health research unit. There is such a collaborative and supportive ethos that makes the problem-solving involved in research really enjoyable. Khalid is always ready to share his expertise and nurture my research. I am very grateful for that.”

She hopes to build on the BMJ research and collaborate with other groups around the world to try to answer some of the questions that still remain about using a urine test to detect HPV, such as: how good is the urine test at predicting cancer, is it cost-effective, should it be a six-month test, should it be used in conjunction with the smear test that detects cancerous cells, and could it be useful for checking levels of HPV in the population?