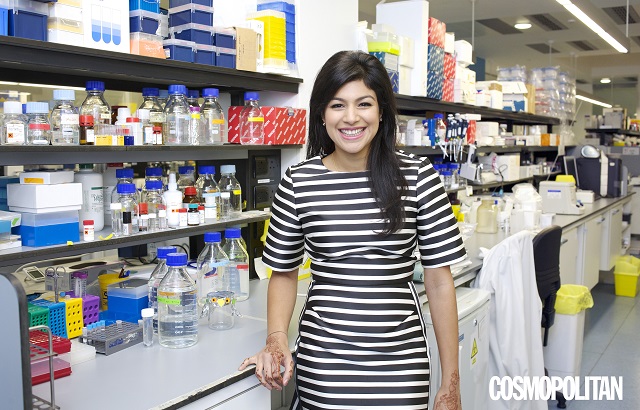 The award, announced during a star-studded ceremony at London’s One Mayfair, is in recognition of Dr Pathak’s research which discovered a simple urine human papillomavirus (HPV) test could offer women a more acceptable, non-invasive alternative to the smear test – the conventional test for cervical disease.

The study, published earlier this year in the BMJ, could one day make a difference to the lives of millions of women. Last year, it is estimated a million women failed to attend a routine smear test – many because of embarrassment – despite 900 women dying of cervical cancer every year.

Dr Pathak’s research is a crucial first step on a road to alternative screening methods. However, years of studying and improving urine testing methods will be essential before it’s possible to roll out as an official screening method.

Dr Neha Pathak, Academic Clinical Fellow in Obstetrics and Gynaecology, Queen Mary University of London, comments: ‘I am truly delighted to win this award. I am passionate about my research and this study is just the beginning of what I hope will be a long journey working to improve the health and lives of women. I thank everyone I’ve worked with at QMUL’s Women’s Health Research Unit who’s supported and inspired me.’

Professor Khalid Khan, Head of the Women’s Health Research Unit, Queen Mary University of London, comments: ‘We couldn’t be more proud of Neha. She’s achieved a tremendous amount for her young age and she plays an important role within our team. Her work on a potential urine test for HPV truly is game-changing and to have this recognised by Cosmopolitan Magazine, which reaches millions of young women, is a huge achievement’.

Cosmopolitan is the biggest women's magazine brand in the world and the Ultimate Women Awards honour both celebrity and real-life women for their bravery and achievements in 2014.

For the real-life categories, Cosmopolitan readers were asked to nominate their Ultimate Women: someone who had touched, moved or impressed with their dedication and determination; someone who had gone the extra distance to improve other people’s lives or a woman who has come through the toughest of challenges with a smile on her face.

From the hundreds nominated, a shortlist was drawn up and the judging panel, made up of Fearne Cotton, Jameela Jamil, Millie Mackintosh, Danny O’Donoghue, Baroness Karren Brady, Dr Linda Papadopoulos and Louise Court, Editor-in-Chief of Cosmopolitan magazine, began the impossible task of selecting the winners.

Fearne Cotton returned to host the event for the ninth consecutive year.

Louise Court, Editor-in-Chief at Cosmopolitan, comments: “With so many young women missing their smear tests, Dr Neha Pathak’s research is both pivotal and truly ground-breaking and has the potential to save so many lives worldwide. Most importantly, HPV urine tests may help to provide a cheaper and faster method of screening for women in poorer countries, where healthcare isn’t affordable. Neha is an absolute inspiration to us all and I’m delighted she was able to celebrate her award win with us last night.”