A team of researchers led by Queen Mary University of London (QMUL) have been awarded the 2014 Cancer Research UK Prize for Translational Cancer Research at the NCRI Cancer Conference in Liverpool. 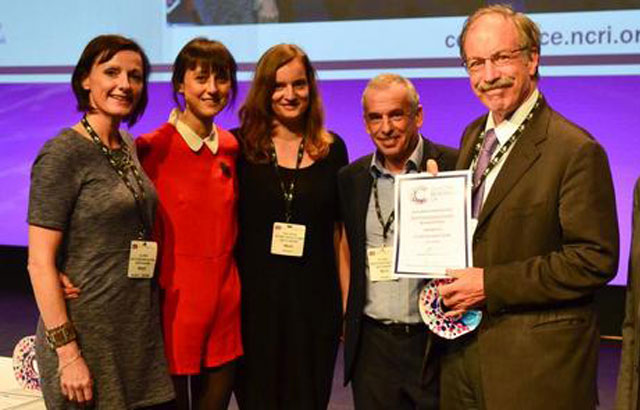 The prize recognises the achievements of scientists who worked on the IBIS-I and IBIS-II breast cancer prevention trials, which found taking preventive drugs can substantially reduce the risk of developing breast cancer in women at high risk of the disease.

Professor Jack Cuzick, Head of the Centre for Cancer Prevention at Queen Mary University of London, comments: “We are truly honoured to receive this prestigious award and would like to thank our colleagues at CR-UK for this recognition of our achievements. We work as a team and a huge number of people contributed to the exciting new discoveries of the IBIS I and II trials, and we all share in the recognition.

“This work began in 1992 with the commencement of the IBIS-I breast cancer prevention trial using tamoxifen, which continues to provide important new information on long term benefits.  Our work on the IBIS-II trial began in 2002 looking at the drug anastrozole, and has been an exciting new development in breast cancer prevention – leading to greater risk reductions with fewer side effects. We now have good choices for high risk women to prevent some breast cancers, but there remains a lot more to do.”