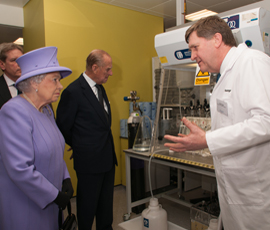 The Queen and Duke of Edinburgh meet Gareth Sanger, professor of neuropharmacology

The NCBRSI was set up to help bring bowel disease – a neglected area of medicine – to the forefront of scientific and surgical innovation. It is based at Barts and The London School of Medicine, part of Queen Mary and supported by the charity Bowel & Cancer Research, which raised more than £2.5m towards the cost of setting up the centre. Other funding came from the Wolfson Foundation and Barts and The London Charity

The National Centre has brought together scientists, surgeons and industry, providing them with a first-class facility to enable breakthroughs in the understanding and treatment of bowel disease. It is also intended to accelerate the uptake of surgical innovation in this area into the NHS and provide a model for other disciplines.

Diseases of the gastro-intestinal tract, or gut, account for one-in-six hospital admissions in the UK and are the third most common cause of death. Each year more than 41,000 people are diagnosed with bowel cancer in the UK and 16,000 die from it, making it the nation’s second biggest cancer killer after lung cancer.

On arrival, Her Majesty The Queen, accompanied by His Royal Highness The Duke of Edinburgh, was met by the Lord-Lieutenant of Greater London who introduced the royal party to Professor Norman Williams, Director of the NCBRSI and President of the Royal College of Surgeons and Professor Mike Curtis, Director of Queen Mary’s Blizard Institute, where the NCBRSI is based.

Once inside the royal couple heard a presentation on the setting up of the NCBRSI from Professor Williams, who explained how he and colleagues had recognised there was a need for a multidisciplinary approach to bowel problems if progress was to be achieved in the understanding and  treatment of this relatively neglected area.

The Centre’s co-director, Professor Charles Knowles, then accompanied the royal party on a tour of the laboratories, starting with an overview of the state-of-the-art human tissue laboratory, the first of its kind in the world which enables research with living human tissues.

The Queen and Duke of Edinburgh met some of the 30 clinicians and scientists based at the Centre who explained their work and provided demonstrations of human muscle, tissue and nerve experiments.

On leaving the laboratories the royal party met some of the Research Fellows based at the Centre who explained the clinical trials the unit runs. The party then moved on to the offices of Bowel & Cancer Research, which raised more than £2.5m towards the cost of setting up the centre, and met Chief Executive Deborah Gilbert along with charity staff and supporters.

At the conclusion of the visit the Queen was the first to sign the centre’s visitors’ book.