Scientists investigating how certain genes affect an individual’s risk of developing coronary heart disease have identified a new therapeutic target, according to research published in the American Journal of Human Genetics. 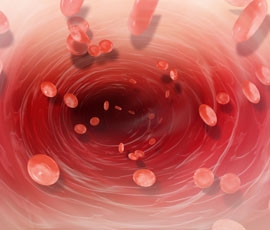 They have discovered that an enzyme known as ADAMTS7 plays a crucial role in the build-up of cells in the coronary arteries which lead to coronary heart disease.

Coronary heart disease (also known as coronary artery disease) is the nation’s biggest killer, with around 94,000 deaths in the UK each year. The condition happens when the blood supply to the heart is blocked by a build-up of fatty deposits – called atherosclerotic plaques – within the walls of one or more of the coronary arteries.

Lifestyle factors – including smoking, a bad diet and lack of exercise – contribute to an individual’s risk of heart disease, but a number of genes have also been found to play a role.

The research was led by Shu Ye, Professor of Molecular Medicine and Genetics at Queen Mary, University of London. Professor Ye said: “Recent studies have identified a number of genetic regions that are associated with coronary heart disease. However, to translate these findings into new therapeutics which could benefit patients, we need to understand how these genetic variants are influencing the disease.”

In this study the scientists focused on a genetic region associated with coronary heart disease which contained the ADAMTS7 gene. This gene governs the production of an enzyme, also called ADAMTS7, which breaks down a structural protein called thrombospondin-5 in the arterial wall. This breakdown allows cells in the wall of the artery to move about more freely, and to migrate into the atherosclerotic plaques, making them larger and the affected artery narrower.

By analysing genetic data from an earlier study which involved 787 people in Italy, together with ultrasound scans of their arteries, the researchers found that a particular variant of the ADAMTS7 gene was associated with a 50 per cent reduction in risk of atherosclerosis.

Professor Ye said: “Through analysing arterial cells from 18 individuals, we found that this ADAMTS7 gene variant reduces the ability of the ADAMTS7 enzyme to break down the structural protein thrombospondin-5. As a result, arterial cells are less able to migrate and consequently we found that individuals carrying this genetic variant are less likely to develop atherosclerotic plaques and, even if they do, the plaques tend to be smaller.

“Further research is needed but this indicates that ADAMTS7 would be a promising target against which new medicines could be designed to act.”