Scientists have identified the genetic cause of a rare skin condition that causes the hands and feet to turn white and spongy when exposed to water. 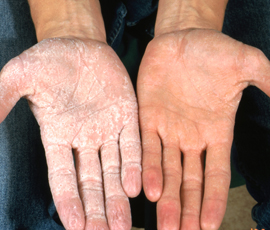 An image demonstrating the appearance of hands following immersion in water

The study, led by researchers from Queen Mary, University of London, has provided scientists with an insight into how the skin barrier functions and could help with research into a variety of conditions. The findings are published today in The American Journal of Human Genetics.

Diffuse non-epidermolytic palmoplantar keratoderma (NEPPK) is a rare condition in which individuals have thickened, yellowish skin over their palms and soles, thickened nails and suffer from excessive sweating. When their hands and feet are exposed to water, the skin quickly turns white and spongy and individuals are prone to fungal infections.

While prevalence in the general population is estimated at one in 40,000 it is much higher in northern Sweden (up to one in 200 people)*, where a single ancestral genetic mutation is believed to have originated and then subsequently passed down from generation to generation.

A team led by David Kelsell, Professor of Human Molecular Genetics at Queen Mary studied DNA from a number of families of British and Swedish origin in which the skin condition is present. Using high throughput DNA sequencing methods they were able to pin down the underlying cause of the condition to mutations in the AQP5 gene, which encodes a water channel protein known as aquaporin 5. All individuals who have inherited an AQP5 mutation will present with this rare skin condition.

Professor Kelsell, from the Blizard Institute at Barts and The London School of Medicine and Dentistry, Queen Mary, said: “Aquaporins are a family of proteins known as “the plumbing system for cells” as they form pores which allow water to flow through cells rapidly.

“We knew aquaporin 5 was present in high amounts in the sweat glands, salivary glands and tear ducts – routes by which the body loses water. Here we’ve demonstrated it is also found in the skin, with higher amounts in the hands and feet.”

Co-author Dr Diana Blaydon, also from the Blizard Institute, explained: “The AQP5 gene mutation appears to result in a protein that has a wider channel than usual, forming a bigger pore in the cell membrane allowing more water to permeate it.”

Further work is needed to understand exactly how the mutations identified and the associated changes in the skin barrier lead to NEPPK .

Professor Kelsell added: “While we’ve studied aquaporins in the skin, these results also give us an idea of what might be happening in internal aquaporins, which are found in structures throughout the body, including the kidneys, cornea and lungs.”