A Deputy Prime Minister of the Russian Federation visited Queen Mary, University of London’s Whitechapel campus on Wednesday 1 May, on a tour of east London’s expanding technology innovation hubs. 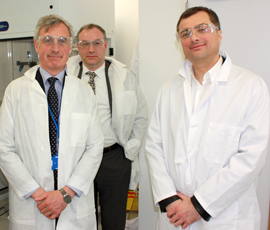 Mr Vladislav Surkov toured the Queen Mary BioEnterprises Innovation Centre in a fact-finding mission, as the Russian government rapidly develops its own science city, Skolkovo, on the outskirts of Moscow.

The 52,000 square foot facility comprises three floors of high specification chemistry and biology workspace. It is a wholly owned company of Queen Mary Innovation, the technology transfer company of Queen Mary, and was built through a four-year capital investment partnership between the University and the London Development Agency.

Mr Surkov described Russia’s new focus on science and innovation, as the country diversifies its economy away from fossil fuels. Skolkovo – which is currently in development – will incubate scientific ideas, take them to the market place and deepen and broaden the creation of intellectual property inside Russia.

Prospective tenants at Skolkovo will need to prove their innovative idea and establish alliances with both a Russian university and overseas partners. Government grants will help support new businesses as they develop, and the state is investing heavily in the project with special tax status, building a new university, a business school and a dedicated innovation centre and transport links. Private companies are investing in cultural centres and housing.

Tenants who rent space at the site have access to the skills and expertise of the researchers, academics and students at Queen Mary. Government investment in east London’s transport system and the world-class clinical research facilities of the Royal London also greatly benefit clients.  The QMB Innovation Centre opened for business in September 2010 and has quickly filled up with science companies, supporting the creation and safeguarding of over 250 jobs.