Meals at high street and celebrity chef chain restaurants have been shown to contain high levels of salt which would warrant a red traffic light label in a supermarket, according to research published today to launch National Salt Awareness Week 2013 (11-17 March). 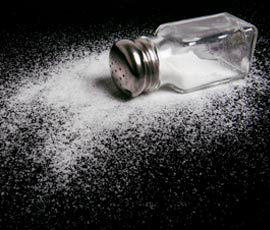 The survey, by Consensus Action on Salt and Health (CASH), based at Queen Mary, University of London looked at 664 main meals from 29 popular high street and celebrity restaurants, fast food and café chains. The survey found that 347 meals (52 per cent) had more than 2.4g of salt per portion – which means they would be labelled with a red traffic light for salt content in a supermarket.

Celebrity chef restaurants and high street chain restaurants both came out higher than cafes and fast food chains, partly due to larger portion sizes, with an average of 3.1g salt per meal, half a person’s daily recommended amount of salt. The thirteen saltiest main meals in the survey contained more than 6g of salt – the maximum recommended daily allowance of salt.

Katharine Jenner,Campaign Director and Nutritionist for CASH, said: “We are all eating too much salt. If you want to cut down at home you can do; by reading the labels, using less salt in cooking and using less processed food.  However it’s not so easy when you are grabbing lunch on the go or out for a nice evening meal.  As most of the salt we eat is hidden in our food, for National Salt Awareness Week, CASH, with the support of 11 national health charities, is asking the public to stand up to chefs and ask for ‘less salt please’”.

Alongside the food analysis, a survey of more than 1000 people found that 54 per cent find restaurant meals too salty, and nine out of 10 believed restaurants and cafes should let them choose if they want to add salt to their meal or not.

The CASH researchers say celebrity chefs Antony Worrall Thompson, Jamie Oliver and Raymond Blanc have already committed to reduce salt levels. The research suggests café chains such as Costa and Pret a Manger appear to have made some progress, and are now provide labelling online so customers can plan their meals ahead.

An analysis of food from five fast food outletslooked at the percentage of dishes containing over 2.4g of salt per portion. The results were:

National Salt Awareness Week 2013 is encouraging everyone to eat less salt and to enjoy the real flavour of food.  The population average intake of 8.1 grams of salt per day exceeds the maximum daily recommendation of 6g per day (about a teaspoon). The Department of Health estimates that reducing salt intakes by just 1g - a pinch of salt - would save 4,147 preventable deaths and £288 million to the NHS every year [3].  A high salt diet is also linked to a number of other serious health conditions such as stomach cancer, osteoporosis and kidney disease.

Graham MacGregor, Professor of Cardiovascular Medicine at t he Wolfson Institute of Preventive Medicine, at Queen Mary, University of London and Chairman of CASH said: “Salt puts up our blood pressure, and as a result, thousands of people die unnecessarily each year from strokes, heart attacks and heart failure. Whilst efforts have been made by foods in supermarkets to use less salt, chefs’ preference for saltier foods is preventing further progress. It’s clear from our survey that some chefs are not listening to their customers.   These chefs need to get their act together and stop shovelling salt in our food.”