BioMoti, a company set up by scientists from Queen Mary, University of London to develop technology to deliver targeted cancer treatment has received £150,000 under the Seed Enterprise Investment Scheme (SEIS). 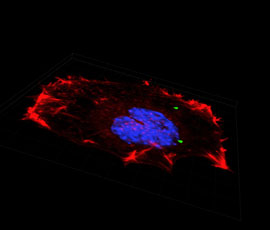 A cancer cell which has taken up microparticles developed by BioMoti

BioMoti was set up to develop the oncojan™ therapeutics delivery platform for clinical use.  Oncojans™ are a new class of advanced therapeutic microparticles that can target and gain entry into cancer cells where they slowly release drugs at the point of need whilst sparing healthy tissue.

The technology has been developed following research at Queen Mary, which showed that cancer cells could be tricked into ingesting microparticles containing a common chemotherapy drug if they were coated with a special protein called CD95. Once inside the cell, the microparticle can slowly unload its chemotherapy cargo, which kills the cell to reduce the size of the tumour.

Early preclinical studies showed that using this technology to deliver a common chemotherapy drug, paclitaxel, led to a 65-fold reduction in ovarian cancer tumours in an animal model over the standard method, doubling of median survival and decreased toxicity at healthy tissues.

The new funding, from the Oxford Technology OT(S)EIS Fund and an existing shareholder, will help the company progress towards clinical trials.

Dr Davidson Ateh, a research fellow at Queen Mary’s Blizard Institute specialising in bioengineering and CEO of BioMoti, said: “This private investment round follows the recent award of a TSB Biomedical Catalyst grant that together will enable the initial development stages of our promising lead ovarian cancer candidate and business growth. We very much look forward to working with new investor Oxford Technology towards clinical translation of our exciting platform.”

Dr Keith Powell, Chairman of BioMoti said: “The small team at BioMoti have worked very hard to progress the project to this point and the encouraging data we have seen demonstrates the exciting potential of the technology to increase efficacy and reduce toxicity in the same delivery of an active chemotherapy. We look forward to getting this treatment to the clinic and eventually to patients.”

Lucius Cary, Managing Director of Oxford Technology said: “Oxford Technology is delighted to be investing in BioMoti.  Ovarian cancer remains a major problem and BioMoti’s approach offers the possibility of a substantial improvement over the current methods of treatment.”

Graeme Brown, Director of Technology Transfer at Queen Mary Innovation (QMI) said: “Queen Mary is committed to delivering impact from commercialisation of its research activities. QMI has worked with the founders over a number of years and we are delighted that this funding will enable the continued progress of the technology along the pathway to patient benefit.”