Three scientists from Queen Mary, University of London, have received grants totalling £540,000 from the Pancreatic Cancer Research Fund (PCRF) to carry out ground-breaking research to improve the prognosis of the disease. 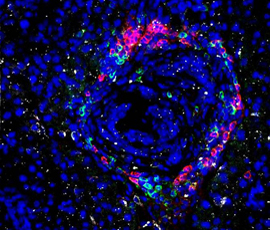 The awards, to scientists at the Barts Cancer Institute at Queen Mary, are among six projects which the PCRF has announced today.

Each year around 8,500 people in the UK are diagnosed with pancreatic cancer. It is an extremely difficult cancer to diagnose and treat because it is unusually aggressive, symptoms are often vague and generally appear at an advanced stage of the disease. Just three per cent of those diagnosed with pancreatic cancer survive five years or more, a figure that has barely improved in forty years.

The three scientists awarded grants at the Barts Cancer Institute at Queen Mary are:

Dr Thorsten Hagemann, Senior Clinical Lecturer, who will examine the role of a newly described population of regulatory B cells, which play a central role in suppressing the body’s immune response and have been shown to promote tumour growth in animal models. Dr Hagemann’s £180,000, three-year study will look to confirm the cells’ role in human tumour development, defining the sequence of chemical interactions that regulate their function, which he believes may offer a new target for designing new immunotherapies.

Dr Yaohe Wang, Reader in Molecular Oncology, has been awarded £180,000 for a two-year project to engineer the Vaccinia virus – safely used to prevent smallpox in millions of people - to infect and kill pancreatic cancer tumours, leaving healthy tissue unharmed. His previous PCRF-funded research identified that the Vaccinia virus was effective against some forms of pancreatic cancer cells in laboratory tests, so he now aims to use the virus to activate an immune response against these cancer cells to both kill the cancer cells and prevent them returning.

Dr John Marshall, Reader in Tumour Biology, has secured £180,000 for a three-year project that builds on previous PCRF-funded research. Dr Marshall identified a molecule known as integrin alpha v beta 6 (avb6) that is found on the surface of cancerous pancreatic cells (but not normal pancreas cells) and allows them to invade healthy tissues more easily. In laboratory tests, he also found antibodies to stop avb6 from working properly and this prevented them from moving, invading and growing. The new PCRF funding will allow him to progress the tests using specially bred mice that get pancreatic cancer and closely mimics the development of the human form of the disease. Furthermore, Dr Marshall hopes to develop a new strain of mice which lack avb6 completely, to see if these mice are unable to develop pancreatic cancer. If this is the case, then this study may provide enough data to allow the development of clinical trials using antibodies to block avb6.

PCRF founder and CEO, Maggie Blanks, said: “In the early years of the charity, our research focus was more on basic research to understand the molecular biology of the disease. This was important, since research into pancreatic cancer has historically lagged behind that of other cancers. But now there’s a feeling amongst the research community that we talk to that we’re on the cusp of making breakthroughs that will finally start to improve the prognosis of this cancer.”

For further information on the PCRF visit www.pcrf.org.uk