A Queen Mary PhD student has received an international research award for her work on Tourette’s syndrome. 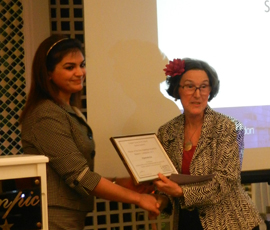 Priyamvada Dua’s work focuses on identifying the immunological, environmental and genetic factors which increase susceptibility to Tourette syndrome (TS) – a neuropsychiatric condition. TS affects more than 300,000 children and adults in the UK and the key feature are tics, involuntary and non-rhythymic vocalization or motor movement.

The exact cause of Tourette’s is still unknown, but genetic, immunological and environmental factors are known to play a role. Priyamvada’s PhD, carried out within the Neuroimmunology Group at Queen Mary’s Blizard Institute, focuses on the idea that autoimmune mechanisms may play a role in the disorder.

Autoimmunity is when the body’s immune system targets its own cells and tissues. In Priyamvada’s study the scientists looked at the effects of previously described autoantibodies found in TS patients’ blood on neuronal cells in test tubes. They showed that these autoantibodies changed the way these cells functioned.

Priyamvada Dua said: “I feel very honoured to have been given this award. Obviously we have to further characterise these autoantibodies, find out why they are generated and whether autoimmune mechanisms and Group A streptococcus infections may play a role. However, this is potentially exciting and highlights the need for further studies into the role of the immune system in Tourette’s syndrome.”

Priyamvada is part of the European Multicentre Tics Study (EMTICS), a consortium looking to identify the genetic and environmental susceptibility factors in Tourette's syndrome, with a particular focus on understanding the role of autoimmunity and infections. Part of the study is a clinical trial that targets bacteria infections such as Group A streptococcus, to see whether treatment improves the severity of tics.

Dr Ute-Christiane Meier, Priyamvada’s supervisor, said: “Priya had the courage to make an unusual career choice by moving into psychoneuroimmunology.

“This area is relatively young and is trying to understand how the immune system impacts on psychiatric diseases, which will hopefully help de-stigmatise these diseases and may potentially offer new treatment options. I am convinced that Priya’s talents will continue to flourish, and that she will have a fulfilling and successful career in this field.”

The Professor Mary Robertson award is open to all junior researchers working in the field of Tourette syndrome. It has been endowed by Professor Robertson, the Life President of ESSTS.